Before the Sims, Maxis focused on making management games like SimCity and a bunch of spin offs. Some quick cash-ins like SimIsland and SimTower (originally called “the Tower” in Japan) weren’t the best follow ups to SimLife and SimCity. Oddly enough Vivarium known for creative games like Seaman steps in to port the Tower over for the Game Boy Advance. It worked well for SimCity 2000, but can a second rate Maxis title pull off the same success? 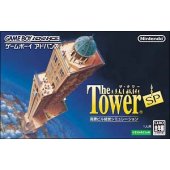 As you probably guessed in the Tower SP you’ll be building a tower of offices, hotel rooms, and entertainment. The main goal of the game is to populate your skyscraper with as many people as possible. When you start out working for Yamanouchi Group you can only layout the basics: offices, condos, security and cleaning services. Offices pack in the people and provide a quarterly income. Condos give players quick cash once and a few extra residents. Now that you have people inside your tower you need ample security to protect the virtual inhabitants from thieves and cleaning services to prevent roach infestations. As the tower grows, so does its star rating. The star rating allows players to build more structures, like hotel rooms, cinemas and a metro station. Areas designated for daily business (cinemas, shops and restaurants) bring in daily income and attract different demographics depending on what kind of shop or restaurant is made.

Most of the time people will be focusing on how to increase the size of their tower, but there is one more thing players will need to pay attention to the stress level of the people. It seems like the visitors can get easily stressed out. If they have to wait to long for an elevator, can’t find parking or just don’t have their favorite restaurant their stress level will raise. People indicated by this are colored pink or red, if they are high strung. Too many stressed out people leads to closed offices and empty pubs. Maintaining their stress level is fairly simple. Just make sure elevator traffic is managed efficiently with the help of stairs and add in a medical center or two which automatically reduces stress levels.

Like a lot of other sim games the Tower SP requires players to be patient. Players have to wait for time to pass until a new quarter comes around for the offices to drop cash in your bank account so you can continue building. While you’re waiting there isn’t a whole lot to do. You can spy on a person throughout their day or clean the restrooms by tapping A. It’s best just to fast forward time, but you’re still limited to how fast you can fast forward time. When you speed time up during the night, it passes quickly. In the day, where most of the game takes place, time ebbs along. It takes a good five minutes to get through one day and if you want to go through an entire quarter that’s three days worth of speeding up. Since your primary income is deposited every fifteen minutes there’s a lot of waiting around when playing the Tower SP.

Similar to the style of Sim City 2000 for the GBA, the Tower SP keeps to its PC roots. The save menu even has a familiar pop up window with an exclamation mark and a status bar. The Tower SP also tries to emulate the mouse controls. You move around the main cursor with the d-pad and pull up the building menu with the R button. The A button is used to select and the B cancels. One problem with the interface is trying to locate specific buildings. Finding large structures like fast food chains and cinemas are easy, but if you want to track down a security guard station to increase the amount of guards the interface can be troublesome. Your choices are either to scour your sky high building in search of a small area that blends in the rest of the building or build another station. A quick search feature would have been useful, or color coding of building types to make the game easier to play.

Interface flaws aside, the Tower SP is an addictive game. The levels are spaced out accordingly so players are always close to achieving another goal. Once you get a four star tower and build a cathedral, new scenarios will be unlocked. There’s a lot of hours that player can spend building their tower, but the Tower SP will only entertain gamers into the whole PC sim craze of the nineties.

This playtest is based on the English/North American release of the Tower SP. Since the game is heavy on the text the North American version is highly recommended.

– Cons: Using the D-pad to control the game is awkward at times and the gameplay is a passive experience compared to other sim games.

Overall: The Tower SP is a unique addition to the Game Boy Advance library. If you’re into PC games or love SimTower this is for you, but the slow passage of virtual time doesn’t make it an ideal portable game.