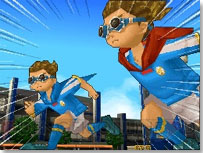 No surprises here. Another key Level-5 title debuts with fantastic numbers as Inazuma Eleven 3 released in Japan last week, outselling its predecessor by double. Close behind it were Taiko no Tatsujin for DS and BlazBlue: Continuum Shift.

World Cup fever still seems to be having its effect on Japan’s gaming populace. Not only did Inazuma 3 do great, Konami’s two recent Winning Eleven games soared back into the top-ten yet again.

The top-ten for the week of Julne 28th – July 4th was as follows:

A mere week after enjoying the #1 spot in the top-ten list, Monster Hunter Frontier dropped to the #14 position, just below Atelier Totori at #12. Meanwhile, Ghost Trick and Xenoblade occupied the #21 and #22 spots respectively.

Oh, and Idea Factory released another otome game. This week, it was Hanayaka Kana, Ware ga Ichizoku, a title that puts you in the role of a country girl hired as a maid into the rich Miyanomori family during the Taisho period. Your selection of guys includes the six potential family heirs, with whom you can aim for a happy ending. This one debuted way down at #35. You can find screenshots of it here.