The annoying money rupee grabbing fairy from the Legend of Zelda series got his own game commonly known as Tingle RPG (also known as Mogitate Tingle no Baro Iro Rupee Land or Tingle’s Rose Colored Rupee Land in English). The game begins with Tingle before he got his green spandex costume lying around on the floor of his home. He’s 35 years old and unsatisfied by his life. So he stumbles outside and gazes into a pond where the god of rupees speaks to him. He shows Tingle the path to Rupee Land a paradise with bountiful buffets and a beach to lie on. There is a catch though Tingle needs to pay his way in rupees to get there. 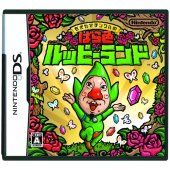 The rupee god gives Tingle his classic green outfit and a meager hundred rupees to begin his journey. That kind of money won’t get Tingle closer to his goal, he’s going to need over 1,000 rupees to make the tower to paradise grow three meters. Tingle can earn money by fighting monsters in perhaps the most passive combat system ever in a Zelda title. Tingle runs up to a giant hog or a clam and starts wrestling with it in a cloud of dust. Players can tap on the screen to help Tingle out, but there isn’t much to do besides sit down and watch the outcome. If Tingle wins the bout the enemy will drop items like bones or meat and if you’re really lucky rupees. There is a slight twist to the system where you can pull in multiple monsters to fight at once to increase your bounty. Tingle can bring the goods over to town to sell them for a low amount of cash or head to his house and make recipes, which can sell for more money.

Going into town isn’t as simple as walking right in. A guard blocks the entrance and the only way to get past is to bribe the guard. Bribing and negotiating rupees prices are a cornerstone of Tingle RPG’s gameplay. When you go up to the guard a tiny touch screen calculator pops up. You poke in the amount you want to give to the guard for entry. If he accepts then you go through, otherwise the guard takes your money and you have to try again with a higher bribe. There is a sense of mystery to the system because if you go too low you’re not going to be able to pay anyone. On the other hand you want to spend as little as possible so you don’t have to spend extra time scrounging for rupees. The town guard is just the beginning, if you want to sell items to a shopkeep that means another “negotiation”. Probably the optimal way to get through these scenes is to save and reload, but that takes out some of the fun in the system.

There’s another reason why you don’t want to waste rupees, they’re Tingle’s life bar. Every time Tingle gets into a scuffle or falls into a trap like water it’s game over. You’re going to want to make sure you have a sizeable amount of life/cash before entering into dungeons. Zelda fans will feel right at home with the dungeons since they’re filled with the usual flip a switch here, find an item there puzzles fans of the series are accustomed to. Although fans might be disappointed to hear that the dungeons are a lot easier than other Zelda games. You aren’t going to rack your brain solving puzzles or have an intense combat moment when you’re down to a single heart container. When Tingle steps into some dungeons he has a chance to pick up a bodyguard for a price. The first ally he meet is a huge green ogre who can fight for Tingle so you don’t have to worry about dying. With a bodyguard by your side walking through a dungeon is a breeze. Boss fights get more interesting. The first one pits you against a giant crab and there is no way to run up to fight it. Instead Tingle uses his trademark balloons to fly and drop bombs from above.

Completing dungeons are a quick way to make a buck, but aren’t the only option. Instead Tingle can earn rupees by finding making complete maps for the map shop. First you have to buy a blank map, then walk around and highlight strange landmarks. Once you find all of the hidden landmarks you bring the map back and collect your reward. Other times you can make buckets of money by fetching items for people, although you have to negotiate your reward. After you do a favor like creating medicine, the familiar calculator interface pops up. It’s up to the player to determine how much to be paid. If you say too much you’ll get nothing, but if you say too little Tingle gets the short end of the stick.

Tingle’s Rose Colored Rupee Land is really based around successfully negotiating and bargaining. Sure there are dungeons, but they are so easy to complete. As for the fighting system it is way too passive. What Tingle’s adventure offers is a creative world and twisted art style, but it is ultimately Zelda fans that are going to be wanting more than that.

Tingle RPG is a heavily text based game. Negotiating, finding recipies and understanding the story all require a very good knowledge of Japanese. One the bright side the game is pretty much in kana.

The status of Tingle RPG’s North American release is shaky. Nintendo is asking gamers to request it if they want to see a localized version.

+ Pros: A fresh art style and a humorous story.

– Cons: Way too easy to complete and the gameplay isn’t exactly engaging.

Overall: Tingle’s Rose Colored Rupee Land has its own style of gameplay based upon talking and negotiating, not adventuring. While it is fresh, it just isn’t very entertaining or captivating.