Adventure games are all of the rage on the DS. Lost in Blue, Trace Memory and Phoenix Wright sparked a rebirth of the genre. Now Touch Detective from Atlus / Beeworks enters the market. It is a story about Mackenzie, a child detective, who gets wrapped up in helping her happy go lucky friend Penelope and competing with her illogical rival Chloe. The premise of the game is simple enough that it seems like Touch Detective can do no wrong and the game’s art style is brilliant. So what happened between the game’s announcement and the final release? 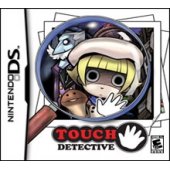 The problems with Touch Detective don’t lie in the story. Instead of having Mackenzie solve realistic criminal cases, Touch Detective blends in fantasy. The first case has Mackenzie chasing down a dream thief, later Penelope is abducted by a strange "alien" and the third case involves finding a home for a snow fairy. Because of the amount of dialogue in the game Touch Detective’s localization has to be handled very carefully and Atlus did just that. They managed to give each creative character an original personality and add throw in jokes to keep the script engaging. For a kid Mackenzie is quite logical and completely the opposite of her friend Penelope who gets into all sorts of problems because of her innocent nature. Mackenzie will meet a cast of colorful characters like Dover the shark who loves sweet treats, the socially devoid Lynsey who talks through her puppet and a walrus who wants to move out of an ice skating rink to lie by the beach. The art style has wide eyed, doll like characters that appear to be sketched with colored pencils. It is a refreshing change from the overused anime look. The fascinating cast, story and art design are clearly Touch Detective’s strong points.

To explore Mackenzie’s town you tap the screen and Mackenzie will walk there. If you drag the stylus across the screen the young detective and her pet Funghi will follow your trail. The world is broken up into separate areas, one for Mackenzie’s office, another for Penelope’s condo complex, a park, a shopping area and later on the planetarium and circus. There aren’t too many places to explore in Touch Detective since you’re restricted to a few areas and a few screens in each location. If Mackenzie wants to investigate an object all players have to do is tap the object in question. Mackenzie will go up, look at the object and pocket it if necessary. If the object has an interesting texture Mackenzie will add it to her touch list, a set of fifty hidden objects in the game. As you can see most of the game is played out on the bottom screen while the top screen is reserved for Mackenzie’s thoughts. If you glance up during conversations Mackenzie freely expresses herself through thought bubbles, an interesting idea that works well with Touch Detective. Seeing what Mackenzie thinks provides a real time introspective look at the main character rarely seen in games.

With such a small area to investigative Touch Detective is a complex game to complete. The puzzles are brain bending because they don’t always make logical sense. In a dream sequence Mackenzie needs to grab a key, but Penelope’s landlord is blocking the way. How do you get past her? Using a hand pump to inflate her like a balloon. Maybe it’s just me, but I wouldn’t intrinsically figure that out. Instead I just happened to randomly try that soultion and got to progress forward in this game. Like most adventure games Touch Detective is super linear. You have to talk to characters in the right order and find all of the items needed to complete an episode. There is quite a bit of backtracking and at times you’re going to have to try everything to progress through a case. Since the game is so cryptic Touch Detective can have players ripping out their hair just to figure out what to do next. Sure you can look at an FAQ, but that just ruins the game.

After each episode wraps up Mackenzie has a chance to step outside of her office and head to town for a bonus episode. In these short sequences Mackenzie can see what happened to the characters after she cracked the case and do some basic fetch quests. While the bonus episodes are a good addition they don’t extend Touch Detective’s gameplay that much. Touch Detective also suffers from another common problem with adventure games, the lack of replay value. Once all of the episodes are solved there is no real reason to go back and give Touch Detective a second look.

Because of frustrating puzzle solutions and the lack of replay value Touch Detective is a hard game to recommend. I did genuinely enjoy the story and the style of the game, but I was going out of my mind when I was trying to distract the planetarium owner. It wasn’t just that single moment, but there were plenty of confusing times where players are forced to tap the screen searching for the magic spot to pick up an item. What was the solution to the puzzle? Going to the fortune teller’s place and tapping on a pile of unmarked maps to get an astrology chart.

– Cons: The puzzles in Touch Detective are difficult because contrary to the gameplay they are misleading. This makes many parts of Touch Detective incredibly frustrating.

Overall: Touch Detective has its moments, but there are more times you’re going to be lost in the game rather than enjoying the story line. If you enjoyed classic SCUMM games Touch Detective is right up your alley, otherwise you might want to try before you buy.