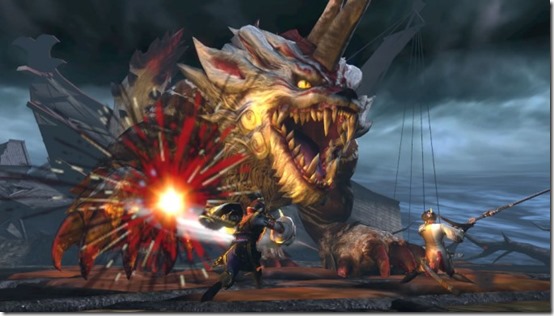 Toukiden Kiwami released in Japan earlier this Summer, and it looks like producer Takashi Morinaka already has some ideas for the future of the series, which he briefly talked about in this week’s issue of Famitsu magazine. [Thanks, Hachima.]

During the interview, Morinaka expressed that while the PSP and Vita versions of Toukiden was enjoyed by many, the presentation on PSP was limited due to the hardware.

With that in mind, he commented about how he’d like to improve on the series’ presentation by bringing Toukiden to home consoles. He also mentioned that many fans from abroad have also asked about a home console version, which he believes can happen with enough demand.

Morinaka said that the idea is to be able to play the portable version on-the-go, while being able to go home and play on the TV with a console.

Toukiden Kiwami will release in North America and Europe in 2015.