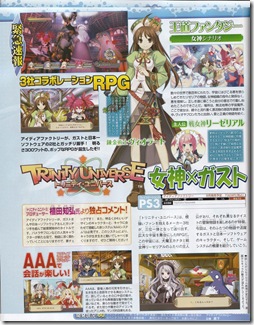 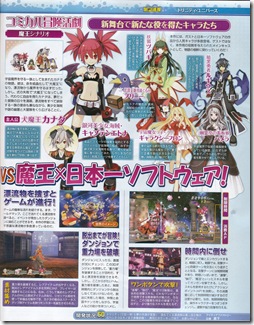 Nippon Ichi, Gust, and Idea Factory are getting together for another PlayStation 3 RPG mashup. Introducing Trinity Universe which has characters from Atelier Viorate and Disgaea… in 3D!

For the first time in a game Etna, Flonne, and Prinny aren’t sprites. Outside of the adventure story scenes, the game uses models for dungeons and combat. Trinity Universe‘s combat system sounds kind of like Xenogears where each attack consumes AP and skills are assigned to three different buttons. Input a set sequence and you can deal more damage. Time is also an important element in Trinity Universe. Players have to destroy a gravitation field and escape a dungeon before time runs out.

Trinity Universe has two different scenarios. A goddess side with Gust characters and a demon lord side with Nippon Ichi stars. The protagonist in the demon lord storyline is a devil dog named Kanata.

Idea Factory will publish Trinity Universe in Japan this August. A release date has not been announced in North America, but NIS America is presenting a 3D PS3 game tomorrow so…