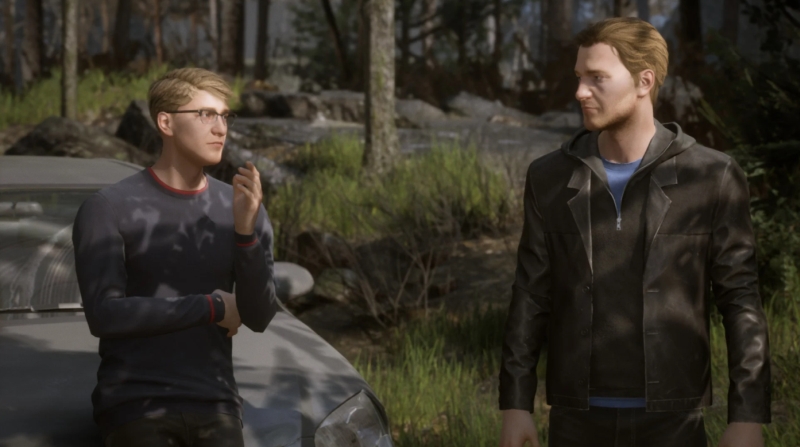 If I were to think of a single sentence to describe the output of French game developer Dontnod Entertainment, I’d come up with something along the lines of “Moving episodic narratives, starring youths.” And I don’t think I’d be entirely off-base with that characterization. There are, of course, exceptions (I still recall 2013’s Remember Me, for one), but by a wide margin, Dontnod’s best (and best-known) titles have fallen along those lines. Twin Mirror, their latest effort, is a little different, though. Unlike the Life is Strange titles and Tell Me Why, Dontnod has opted for a single-release story this time around, starring a cast of grownups. And they’ve taken the opportunity to jump, headfirst, into the foreboding waters of an investigative thriller.

Twin Mirror‘s narrative opens with a former journalist, Samuel Higgs. He’s driving down country roads, on his way home to the rural West Virginia town of Basswood. Unlike a certain song, though, home isn’t the place where Sam belongs: He’s only there to attend the funeral of a friend, and is otherwise estranged from many in Basswood. They blame the closure of the town’s mine and Basswood’s subsequent decline on the work Sam did for the local paper. When he left, few expected him back and were glad for it.

Sam himself isn’t in exactly the best place either, mentally speaking. Twin Mirror sees Sam in near-constant dialog with what can only be described as a double of himself. This double (the character is unnamed) is invisible to others, but serves as a foil of sorts, challenging Sam’s decision-making and rationalization. The game’s major decisions are also often framed as a choice between going with what Sam thinks and following the double’s guidance. It’s a relationship that borders on antagonistic, with the way that the double constantly needles and negs on Sam, but at the same time one never gets the sense that the double is an enemy, or even a frenemy. The double’s interactions with Sam are like those of an adopted, elder sibling, and despite the clear confirmation that the double doesn’t exist, the dynamic feels like the most real thing in the game. That’s partly on the strength of the dialogue writing, but also because by comparison, Sam’s other interactions with the characters of Twin Mirror come across as somewhat stiff, their delivery and animations not quite matching the dramatic tone the narrative demands. Granted, stiff acting in game cutscenes is an issue as old as cutscenes themselves, but the contrast of scenes between Sam and the double and scenes between Sam and everyone else makes that stiffness stand out even more in this case.

Another feature helps Twin Mirror set itself apart from the pack: an investigation component. Sam’s got quite the knack for uncovering the truth, and his sleuthing skills come thanks to an almost supernatural ability: The Mind Palace. Seemingly pulled straight from the BBC Sherlock TV series but actually rooted in Greco-Roman memory exercises, the Mind Palace is a technique designed to help a person recall information by imagining it in spatial terms, placing “items” of memory in distinct locations around a mental landscape. Twin Mirror amps up the Mind Palace concept by rendering as a separate dimension that Sam can enter, examining facts and scenes frozen in time. It’s a fun and novel visualization, especially since I personally am quite tired of Augmented-Reality-style “Detective Vision.” The game also uses the Mind Palace quite creatively, initially showing the space as a safe, unspoiled landscape, that slowly gets altered as Sam’s circumstances (and mental state) deteriorate over the course of the story.

That deterioration isn’t a spoiler: Twin Mirror is a thriller, after all. But what is surprising is how quickly things go downhill. While its key features and relationships are strong, the game’s narrative foundations feel like they’re built on sand. The game begins slowly, letting Sam sink in a bit and reintroduce himself to a town that barely recognizes him, but things escalate rapidly—too rapidly. Subplots and storylines featuring side characters get little time to breathe, and often feel dropped unceremoniously as the main plot picks up. As a result, it feels like Sam barrels from scene to scene like a train on rails, rather than a character following their instincts (or the advice of their invisible friend).

I’m not usually the type to ask for a game to be longer, but Twin Mirror could have used an hour or two to help fill out its fairly compact six-hour running time. If anything, it feels like the game has suffered from its original plan to be a three-episode title, compressed to fit a single release. The casualty of whatever chain of decisions led to that shortening was the game’s pacing and characterization. It’s a shame, as those issues dampen the impact of what could’ve been an engrossing yarn, one that dabbles in complex dilemmas and contains some truly intriguing characters. In the end, I spent more time reflecting on what Twin Mirror could’ve been instead of on what happened.

Twin Mirror is available on PC, PS4, and Xbox One.