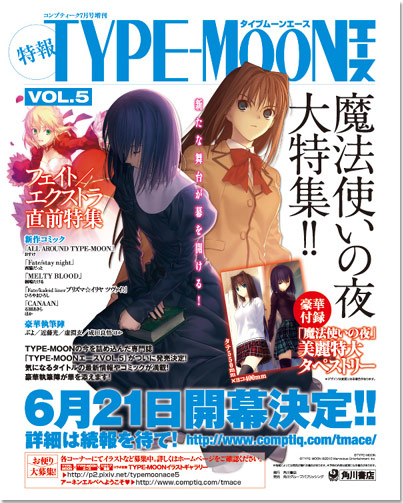 Type-Moon Ace, the official magazine published by Kadokawa Shoten about anything and everything related to the company, has a rather sparse release schedule. Although the magazine was originally launched in April 2008, only four volumes have been published to date. Understandable, given the sparse nature of Type-Moon’s own projects.

Unfortunately, the nature of Type-Moon’s projects also means that not every issue of the magazine comes loaded with new information and features that you’d be thrilled to read. For instance, it would appear volume 3 included a horrendous body-swapping crossover manga based on Type-Moon characters, essentially ruining everything sacred about the fascinating world that they were (are?) building up. So far, volume 2, which talked at length about Mahou Tsukai no Yoru, appears to have been the highlight of the magazine.

Fortunately, volume 5 is around the corner, and considering Mahou Tsukai is scheduled for a 2010 release, hopefully, it will include an update on how that project is progressing. Perhaps even a release date.

For those that may not be aware, Mahou Tsukai no Yoru serves as a prequel of sorts to Tsukihime, and was one of the earelier novels written by Type-Moon co-founder Kinoko Nasu. While the game centres around its own story and characters, the protagonist, Aoko Aozaki, was the red-haired lady that gave Tohno Shiki his special glasses at the start of Tsukihime.