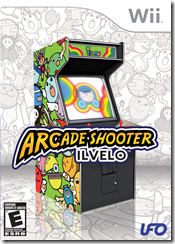 Ever since O3 Entertainment vanished, UFO Interactive has been the source for Milestone games. They picked up Ultimate Shooting Collection and, at one time, planned to publish Illvelo in North America. UFO Interactive even went through the trouble of procuring an ESRB rating for Illvelo, but the game won’t make it to stores.

A UFO Interactive customer service rep explained Arcade Shooter: Illvelo has been canceled. The Wii shooter and its colorful box art also vanished from their website as if it never existed.

Milestone has two other niche fighting games, Project Cerberus and Twinkle Queen, which have not been announced for release outside of Japan. Wonder if UFO Interactive will consider picking these up.

Thanks for the tip Denpa no Sekai!