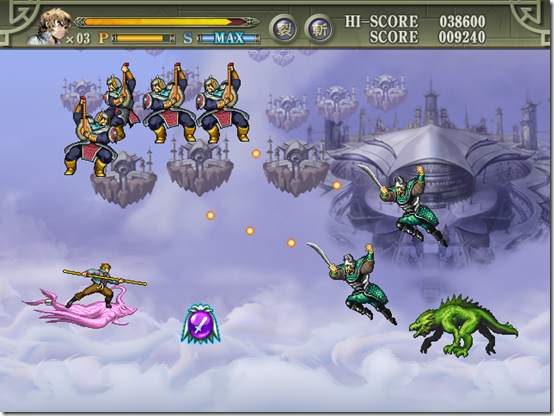 UFO Interactive is working on Saint, a second shmup for Wii based on the Monkey King legend. While Saint uses the same interface as The Monkey King: The Legend Begins the art style is completely different since it’s from a Hong Kong comic book. I asked Chong Ahn, Producer, about the partnership and sneaked in a question about Tokyo Twilight Busters.

Starfish delayed Saint a number of times. What happened?

Chong Ahn, Producer: There were many different types of game play options that we were looking to explore. UFO and Starfish wanted to release a shooter title that would please all fans, new and old.

Saint looks like it uses the same interface as The Monkey King. What was built new for Saint?

Saint keeps all the best game play features from The Monkey King and adds in extra sections that will be very reminiscent to fans of the shooter genre.  These new “3D” sections will add a new element of game play and mix things up for the user. 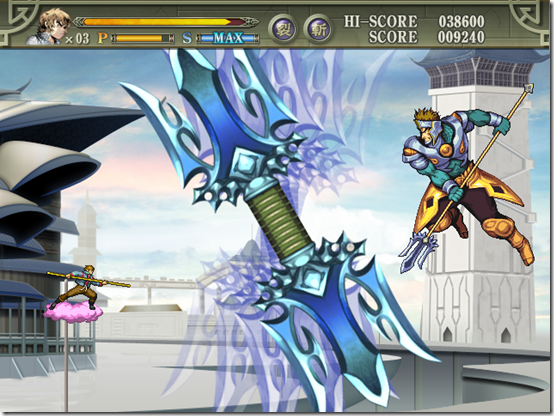 Besides the standard weapon, which can be upgraded to 2 different types of shots, the players will also have the option to choose from numerous secondary weapons such as the Whirlwind, Black Hole, Raging Dragon and more.

Some of these weapons are used for defense, whiles others are for offense.  Choosing the correct one for the situation you are in adds a bit of strategic play. Weapons can be obtained and upgraded through the item shop (which can only be entered by
defeating specific enemies) or through in-game level-up items.

Why did you decide to include 3D levels?

Almost all shoot’em up titles available in the market go with the standard top-down or side-scrolling view, and we wanted to provide the players with a fresh shoot’em up experience.

These sections do not play like a light gun game but as I mentioned above, harkens back to the olden days.

Are there any differences between the game UFO Interactive is publishing and
the Japanese release?

Is it true that Saint is based on a Hong Kong comic book?

Yes it is. A story based upon the highly recognized Monkey King and Journey to the West legends. 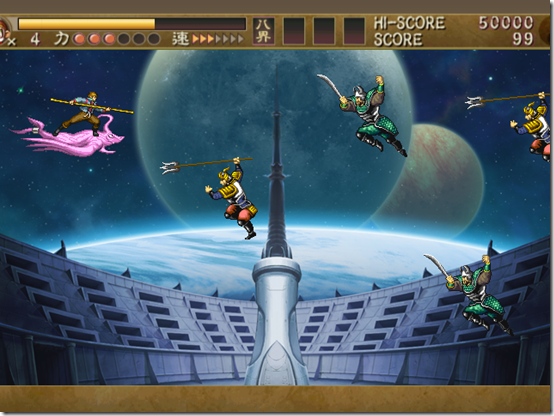 How did that partnership come about?

We were approached by a licensor who saw our Monkey King title and it was an easy partnership from there, seeing as how we had so many interests in common.

While the Monkey King legend is ubiquitous in Asia, it’s almost unknown in North America. I think the setting is one of the game’s key selling points, so how can you overcome this?

Although that might have been true in years past, the legend of the Monkey King is alive and kicking in the North American territories, especially with the release of movies such as “The Forbidden Kingdom” and “Dragon Ball”, along with the long running anime series, which are all interpretations of this story.

It also helps to have sites like Siliconera, who report on these things! :)

How did you handle the localization?

We have a team that works with us in getting the localization accomplished, along with members who were knowledgeable of the entire story.

UFO Interactive Hong Kong said they were working on “Monkey King 2” is Saint their project or is that game something else?

Let’s come back to that one at another time :)

We noticed that you might be localizing another Wii shooter called Arcade Shooter: Illvelo…

Correct! We will be bringing this quirky title to the North American territories in the near future.  Please be sure to look out for it when it hits stores!

UFO has a tight relationship with Starfish. Have you thought about localizing the cult game Tokyo Twilight Busters?

Sure, the possibility is there. We like to keep our options and minds open to new ventures and if the timing and market is right, there can be a revitalization of that title.  Keep checking in with us to see what the future holds, as the possibilities are endless.