The Legend of Zelda: Spirit Tracks is probably the least anticipated Zelda game in recent memory. Upon its reveal, Twilight Princess on Gamecube was treated to wild applause and later went on to be just as popular as a Wii game. Phantom Hourglass was new and exciting at the time of its DS debut, and fans of the Wind Waker style had reason to be hyped for it. It also represented the first major change for Zelda in a while, so naturally, it was kept under constant surveillance and talked about regularly.

Spirit Tracks on the other hand, is something of an oddball in how it’s being perceived. While, like its immediate predecessor, it was revealed at the Game Developer’s Conference, there was some confusion as to just what the game was after its reveal. The mention of Link riding a train made it sound like some sort of a spin-off rather than a proper sequel to Phantom Hourglass. Ever since then, barely anyone has spoken of it and even Nintendo have refrained from releasing much information on the game. You’ve got to wonder how many people actually perceive it as the next real Zelda based on their first impression of it earlier in the year.

Luckily, Nintendo have been more forthcoming with info on the game of late. At the recent Nintendo investor Q&A, Miyamoto neatly sidestepped a question about Zelda Wii and pointed, instead, to Spirit Tracks:

"I was hoping you’d ask about the most recent Zelda for DS. On December 23rd in Japan we are going to release The Legend of Zelda: Spirit Tracks, a sequel of Phantom Hourglass. It’s really fun and challenging. On the other hand it might be a bit difficult for many new Japanese Zelda players who experienced their first adventure on Phantom Hourglass. I believe Spirit Tracks have achieved a unique style and I think you can anticipate the core value of Zelda!" 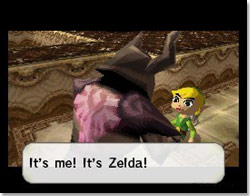 That statement doesn’t really tell you much about the game at all. In fact, all we know so far is that it takes place about a 100 years (I never understand why their time jumps have to be so large) after Phantom Hourglass, that Hyrule Castle is in it, and that Link can "control a Phantom Guardian."

The catch is that this Phantom is possessed by Zelda, who is separated from her own body early in the game and travels with you in spirit form in order to reunite herself with her physical being. And all of a sudden, the game actually sounds kind of exciting. This is the first time a Link and Zelda have worked this closely together.

There’s a couple other interesting touches in the game, too; for instance, the continuity Nintendo seem to be trying to maintain in the Wind Waker universe. The Hyrule Castle palace guard outfits are all modeled around the clothes of Wind Waker’s Link, and the new Link in this game just so happens to be an engineer at the castle, who dons their uniform to blend in and sneak Zelda out, unnoticed by some untrustworthy members of her government. 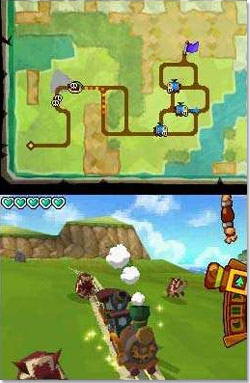 The usual questions spring to mind: Is there going to be some kind of evolution of the relationship between Zelda and Link? And from the looks of the trailer, there seems to be a slightly heavier focus on narrative…?

Non-fans of the Temple of the Ocean King will be happy to know that, while there is a central dungeon again in this game, you don’t have to go through every single level all over again. It sounds like a more streamlined, refined successor to PH from what I’ve read of it so far. The only change I’m a little wary of is having to lay "spirit tracks" on the overworld to be able to navigate it. I quite liked navigating the ship in Phantom Hourglass and I’m a little worried about how much freedom you’ll have in this game.

It’s a little hard to believe I’m doing an Up to Speed column for Zelda. We usually reserve these for games that we feel deserve the spotlight or to gauge what our readers are interested in. I didn’t think a Zelda game would ever require that treatment but what with Nintendo’s handling of Spirit Tracks, it seemed like people were going to miss out on a great game. I could swear it looks (graphically) better than Phantom Hourglass, too.