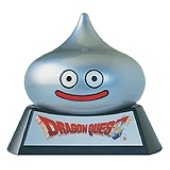 If you want to order one online you can pick up a Dragon Quest VIII slime controller for $40 at most video game stores, but that’s just for a common blue slime. Instead you can be the proud owner of a metal slime controller, that’s only released in Japan. The controller looks cool, but it is only useful for playing RPGs. You have to flip it upside down to reveal analog sticks and all of the buttons. The plastic Dragon Quest stand acts as a base for the controller so you can hold it in your lap. If you’re a collector you might want to check this out.