The most important thing you need to know about Valkyrie Profile 2: Silmeria is that it’s an excellent game, but not necessarily an excellent sequel.

You see, the original Valkyrie Profile – originally released for the PSOne in 2000 and recently ported to the PSP – was one of the most innovative JRPGs out there. You controlled a valkyrie named Lenneth, who flew around the land, gathering up souls of fallen warriors and training them for combat. Compared to other games in the genre, the story was a bit sparse, but it was oozing with delicious melodrama, and the non-linear nature was refreshing for those sick of Final Fantasy.

Yeah, there’s none of that in Valkyrie Profile 2. 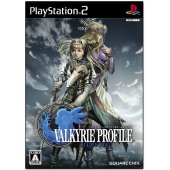 In Valkyrie Profile 2: Silmeria, you take control of a princess named Alicia, a young girl whose fate has been decided by the Norse Gods. You see, the valkyrie Silmeria has been banished from the heavens, and was meant to be reincarnated as a young girl. But due to some kind of cosmic screw up, Silmeria ends up sharing the body of the young Alicia, as the two souls battle for control of the same host. Naturally, this makes the poor girl look like a schizophrenic nutjob, so she’s banished from the kingdom, and left to search the land for a way to set things right. The game is structured like your normal RPG – you run through a town, you run through a dungeon, you fight a boss and repeat. The world map is simply a static screen, where you point and click your locations. There are chapters, but no time limits like the original. The whole game is a lot more…normal.

Many of the compatriots you meet and recruit are human, although you can still call upon the souls of fallen warriors, known as the Einharijar. In the original Valkyrie Profile, each new Einharijiar was introduced by telling their story, and the tear-jerking circumstances surrounding their tragic deaths. In Valkyrie Profile 2, you come across weapons stuck in the ground. If you pick it up, you’ll get a little message that “*Person* has joined the party!”. If you like, there’s a page of text in their status menu if you want to learn their background. And that’s…pretty much it. You can also choose to send these spirit warriors up to the greay beyond, which in turn will get you a few items or other bonuses. Considering how dramatic the original game was, this is all a bit underwhelming.

That’s not to say that Valkyrie Profile 2 has completely separated itself from its predecessor. Far from it – you’ll meet several familiar faces, and the plot slowly but surely intertwines with the story of the valkyrie Lennth. Both the dungeon exploration and battle systems should ring familiar was well, but both are greatly expanded upon.

All of the dungeons are side-scrolling affairs. While all of the sprites and static backgrounds have been replaced by polygonal models and landscapes, the action still takes place on a 2D plane. All of the enemies are visible on the field, and can either be whacked with a sword (to enter battle) or frozen with photon crystals. If you fire a photon crystal at an already-frozen enemy, you’ll switch places with them, and herein lies a majority of the puzzle aspect. Sometimes you’ll need to position a flying enemy in just the right spot in order to reach higher ledges, or sometimes you’ll need perfectly position your crystals so they’ll ricochet through tight spots and hit the enemy on the other side. These don’t exactly require Zelda-style thinking – once you’ve figured how to get past a certain part, it’s more a matter of trial and error to get things to work out correctly – but it makes the dungeons more engaging than your standard RPG fare. You’ll also find different orbs around the levels, which let you mess with various status effects. Many dungeons have built in effects – enemies in a volcano will increase fire damage while weakening water attacks – but you can change that up, providing you can find the right orb holders. It makes exploration even more involving, as hunting down all of the orbs and replacing them will often aid you in the boss battle.

While Valkyrie Profile 2 deviates from your typical RPG dungeon exploration, it completely reinvents the battle system. The combat from the original game has been refocused to concentrate on tactical strategy, all while maintaining the button-mashing glee that made the first game so exhilarating. For starters, the battlefield has been expanded to allow you and your party to run around and engage enemies individually. The action is semi-real time – although you directly move your characters, the enemies only move when you do, so you’re free to strategize without worrying about getting attacked.

When you get in range to attack, the camera zooms up close, and you can proceed with your siege. Each of the four face buttons commands one of your party members the attack. The designers have tailored the system so each attack feels a weight of significance – the controller vibrates, the action briefly pauses with critical hits, sparks and body parts go flying. It’s impressive to watch and feel your combatants massacre their enemies, although all of this button mashing requires a bit of skill –  the object is to keep a combo going so you can max out the power gauge. If you can do this, depending on the weapon they have equipped, your characters can execute a Soul Crush (previously known as “Purify Weird Soul”), which is another name for a fancy special attack which is accompanied by a lengthy cinema, which can thankfully be skipped. It’s a little bit silly to completely demolish the enemy and send them flying across the screen, and yet their health only drops by a small bit – so silly that your characters often comment on the absurdity. (“What? You’re still alive?”)

All of the combo juggling is only part of the battle system though – even more important is finding the right angle to attack. A circle around your leader shows your party’s range of attack, while each enemy has a cone of red that shows their range. Step in that red, and they’ll attack. Obviously, the best solution is to make sure you don’t step in that cone of red, and usually that requires attacking from the side or back. Some enemies also have various weak or strong points, which makes correct positioning even more important. Certain attacks can even destroy enemy equipment or hack off body parts, which makes your job even easier – an enemy with their wings cut off can’t do squat, right?

All of your attacks drain the AP bar, which is restored by killing an enemy, running around or letting an enemy attack. The latter option is what you want to avoid, so you either need to kill enemies in one shot, or get in a position where you can attack and quickly retreat to regain your AP. It’s a brilliant system of wagering risk versus reward, even if you sometimes need to take baby steps so you don’t accidentally end up in an enemy’s attack range.

In theory this all works brilliantly, but there are a couple quirks that make it more frustrating than it need be. The only way to get behind enemies is to dash around them, by pressing the R1 button. However, you need to angle your dash just right, or else you’ll ram into a wall, or even worse, right into your foe. Furthermore, you only technically control the leader, and the only characters just kind of follow – you’ll often find that one or two characters will stuck in the scenery and end up taking damage. Given that it’s entire possible to have your members be severely wounded by a single attack, it’s quite annoying to lose characters because of a fussy control system. Sometimes these stragglers will get totally lost and need to be guided back to your party, wasting precious time. The enemies can’t always figure out how to move the scenery either – one boss I encountered got stuck multiple times, becoming completely incapacitated for several turns. One gets the feeling that the battle system would’ve been better suited for a standard point-and-click style interface, although that would reduce the visceral aspect of the combat system, which is really what the combat so fascinating. Even after dozens of hours of playing, it never gets old, because each fight is a mini-puzzle with ever changing solutions. Finishing battles quickly will also result in experience boosts, which requires that you refine your strategy to reap the most benefits.

For as clunky as the battle system can get, it’s nothing compared to the awkward skill building system. Each piece of equipment – helmets, armor, gauntlets, accessories – has a rune attached to it, and depending on their combinations, that character will learn a new skill. It’s an overly complicated permutation of the system found in Final Fantasy 9, and requires a bit too much dumb luck (or a strategy guide) to hunt down which items can teach you which skills.

The graphics are some of the most gorgeous ever seen on the PS2 – if it weren’t for the aliasing and depth-of-field tricks, this would look better than practically every Xbox 360 game out there. Filled with detailed textures and gorgeous lighting, expressive character models and beautifully constructed backgrounds, just running through any given area is practically breathtaking. Many of the castles feel like what a next-gen Vagrant Story would’ve looked like, or what the modern 3D Castlevanias should look like.  The game also supports progressive scan (remember to hold down Triangle and X while the game boots up), which cuts down on some of the aliasing, as well as 16:9 widescreen. The music is once again supplied by Motoi Sakuraba, who concentrates more on epic orchestrations instead of the fast paced progressive rock he’s usually known for. Most of the dungeon music is pretty laid back, and the battle themes don’t quite have the same intensity of the original game, although it does suit the more strategic pacing.

Like many Tri-Ace games, there’s a bunch of random English that pops up in the battle screen, but otherwise, all of the menus, text and voices are in Japanese. Since the game is focused more on action, this isn’t always a big deal, but this can cause problems with some of the stranger status effects or rune equipment.

+ Pros: Extremely fun battle system, and some of the most gorgeous graphics on the PS2.

– Cons: The battle system is a bit sloppy, the skill building system is annoying, and many of the most appealing aspects of its predecessor are gone.

Overall: It’s something of a shame, really – the original game’s concept was pretty brilliant, if a bit unrefined, but instead of fixing it up, they’ve ditched it entirely. But on the plus side, the focus on story will undoubtedly draw in any people that were initially put off by the heavy dungeon crawling and stat grinding. The balance this time is much friendlier, although there are still some aggravating difficulty spikes. Regardless, Valkyrie Profile 2: Silmeria is still a damn fine game, with engaging dungeons, an exciting (if slightly flawed) battle system and another entrancing story about the drama amongst Norse gods.