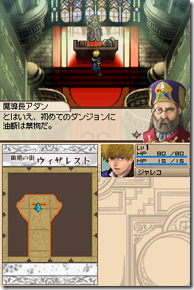 Jaleco known for games like Bases Loaded and Ninja Jajamaru-kun is making a RPG. The project began with Jaleco asking for Internet input. After a 2ch character was voted into WiZman’s World Jaleco stopped asking the public for help.

Now the game is nearing completion. Jaleco plans to release WiZman’s World in Japan on February 25 for 4,980 yen ($56).

They should have continued with their original plan and just made something wacky. Even with its fairy morphing system WiZman’s World looks too plain. I hope Jaleco has some kind of surprise other than the 2ch character to make WiZman’s World standout.