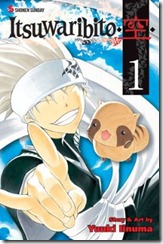 Viz’s latest license is another rather interesting-sounding manga series, titled Itsuwaribito, which goes on sale starting December 14th under the Shonen Sunday imprint for $9.99 U.S. / $12.99 CAN.

The premise sounds unique. Utsuho is a boy whose honesty as a child caused an enormous catastrophe, due to which he decided that lying was the better alternative. Raised in a village of orphans by a monk who inspires him to do good, Utsuho turns into a con-artist of sorts, out to use his skills for good after his master’s death.

Being a shounen series about a con-artist, a little fantasy and action are to be expected. Utsuho is joined on his journeys by a swordsman and a raccoon as he sets out to fight evil with immoral methods.