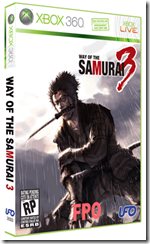 Speaking of budget publishers… you won’t believe who picked up the rights to Way of the Samurai 3. UFO Interactive will release Spike’s conversational samurai game in North America for $49.99 sometime in the future. (Thanks for the tip Hero of Legend!!)

Way of the Samurai 3 is only listed as an Xbox 360 game on their site even though a PlayStation 3 version is out in Japan. Maybe UFO Interactive isn’t a licensed PS3 developer yet? No word about the downloadable content that lets you dress your samurai as a spartan and in cardboard box armor either.

UFO Interactive also stealth announced a bunch of other games Wii games like Army Rescue, Domino Rally (aka Go! Go! Minon), Saint (aka Daisaiou which is based on Journey to the West), and Reversal Challenge (this is for the DS).

We also know Raiden IV‘s price it’s $39.99, which is going to be a tough sale since Raiden Fighters Aces is half of that.

Update: Just got an e-mail from UFO. Way of the Samurai 3 is slated for October. Domino Rally is set for July.