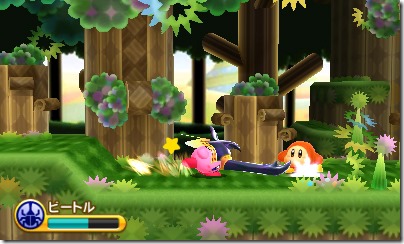 Last week, Nintendo released Kirby Triple Deluxe in Japan, and the game sold an admirable 214,208 copies in its first week on store shelves. That’s the highest opening for a brand new Kirby game in quite a few years.

For reference, here are opening-week sales of the last three Kirby games in Japan:

While Kirby took the #1 spot on the software sales chart last week, Puzzle & Dragons Z was at #2, with 1.2 million copies sold thus far. Pokémon X and Y took #3, while Zelda: A Link Between Worlds and Monster Hunter 4 closed out the top 5.

Meanwhile, it bears mentioning that Grand Theft Auto V, which popped back into the top-20, is now at a whopping 674,835 copies sold. Very, very impressive.

Finally, Final Fantasy X/X-2 HD Remaster is still in the top-20 as well. Both versions of the game appear to have done reasonably well, although the game isn’t having quite the effect one would have hoped for on PlayStation Vita hardware sales.

Hardware sales dropped all around, but Vita and Wii U in particular took a nasty hit. Vita sales dropped to around 32,000 for the week, while Wii U sales were even lower at 14,000. Both platforms need to find a way to expand their reach to a broader audience.