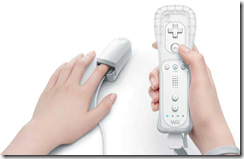 As many were quick to notice, Nintendo’s press conference at E3 2010 last week was geared largely toward the more traditional gamer, and less toward the expanded audience the company has carved out for itself. At a post-conference analyst Q&A, Nintendo president Satoru Iwata brought up the Wii Vitality Sensor, which was absent from the conference.

“What I can say is that prior to the show, when we put the lineup of titles on the table and asked ourselves, “What should we show at E3 this year?” one of the first questions that we asked was whether it was appropriate to focus on the Wii Vitality Sensor at this time within this title lineup,” explained Iwata.

“”Would the Wii Vitality Sensor not get buried under the other titles that were going to be shown?” or, at an event like E3 where it’s full of thrills and excitement, and people are very busy, “Would it be appropriate to ask people who are very busy to come, relax and sit down, and put their finger in the Wii Vitality Sensor and say, ‘Okay, now, please relax and calm down’?” We had questions about whether it was the appropriate venue to show this product. So we decided that we will be taking another opportunity to showcase this product.”

In other words, Wii Relax is still coming at some point in time.