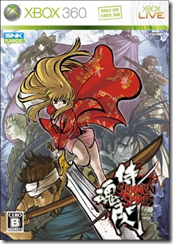 Ignition stepped up by giving SNK’s games more exposure in North America and Europe. The King of Fighters XII had heaps of promotion, way more than any other SNK game in the past decade. Meanwhile, Ignition is silent about Samurai Shodown: Edge of Destiny.

A ketchup heavy version was shown at Ignition’s E3 booth where Edge of Destiny had a 2009 release window. The game isn’t on store shelves and it mysteriously vanished from Gamestop’s and Amazon’s databases.

Here’s another unusual bit. According to Australia’s rating board, Ignition is not publishing or handling Samurai Shodown: Edge of Destiny in Oceania. The OFLC rating lists SNK Playmore as the publisher Samurai Shodown Sen. It appears SNK also changed the title to be closer to the Japanese name, Samurai Spirits Sen. Compare that to The King of Fighters XII OFLC rating which lists Ignition as everything except the author. 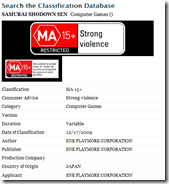 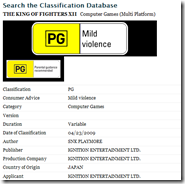 The ESRB says Ignition is still publishing Samurai Shodown, Edge of Destiny, but that was back in October. The OFLC rating is only a few days old. Also, other yet to be announced SNK games like Metal Slug XX and SNK Arcade Classics 0 list SNK as the publisher in North America. Both of those are for PSP, so they could be download-only PlayStation Network games that SNK Japan can publish without help, but something strange is going on with Samurai Shodown for sure.

Did Ignition drop SNK after The King of Fighter XII sales? Was it the other way around? Is SNK going to self publish games in the West again?