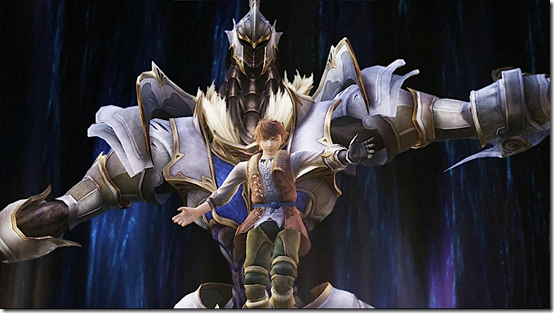 One of the design choices that makes White Knight Chronicles standout is Leonard’s ability to transform into a seven foot tall White Knight. How did this concept get in the game? We asked Level 5.

“This may or may not apply to the western markets, but in Japan, there are a lot of productions that include ‘hero’ characters. As a child (especially boys) we see a lot of characters who transform into heroes, and naturally this becomes something like a dream for many of us in Japan,” Kentaro Motomura, Producer at Level 5 explained in an interview with Siliconera.

Super Sentai, Masked Rider, and to some extent Dragon Ball are series where characters transform into heroes or “power up” similar to how Leonard changes into the White Knight.

“We ran with that idea, and with some curiosity of what would happen if transforming heroes were introduced to a fantasy world? It lead us to the concept of knights from the medieval world. From there, concepts really started to bloom.” Adding the White Knight allowed Level 5 to create more giants. In White Knight Chronicles you’ll meet other transforming heroes, the Dragon Knight and Black Knight, plus gargantuan enemies. While giants play an important role in White Knight Chronicles, they weren’t always the same size.

“An interesting fact is, it took us a very long time to reach and agree upon the final image of the transforming knights. We actually spent a lot of time trying to figure out the size, or design of the knights,” Motomura enlightens.