During development of Wipeout 2048, Sony’s Liverpool studio prototyped a new mode for the game, called “Zombie”. This unfortunately had to be cut from the game. In Zombie mode, you would play against “evil” vehicles that try to destroy your ship. Here’s concept art for one of these ships: 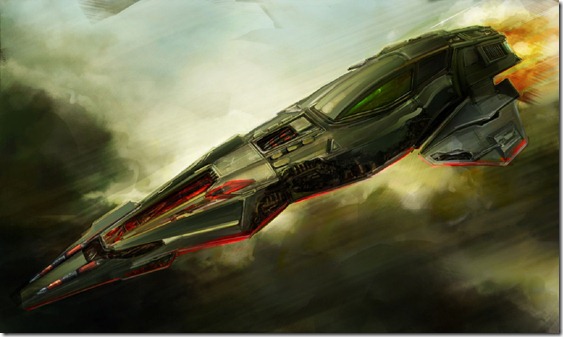 Think of Zombie mode as a survival race. When the race began, you’d alone on the track, but soon enough, the zombie racers would show up and begin to ram into you. While you would receive weapons to defend yourself with, eventually the zombies would blow you up, so the goal was to try and survive as long as you could.

More and more ships would show up, the longer you’d survive. Eventually, you would face a zombie mothership. Unfortunately, due to time constraints, Zombie mode had to be cut from the game, but Studio Liverpool hint that it isn’t “completely” dead, which likely means we’ll see it revived as DLC at some point.

Zombie mode wasn’t the only new mode Liverpool were testing. Other modes were being prototyped as well, but didn’t make it into the game either. The modes that are in the game — aside from regular races — are: Head to Head, Speed Lap, Zone Mode, Time Trial and Combat. Each one has its own separate online leaderboard.

Wipeout 2048 is a Vita launch game in the U.S. and Europe, and will be released on February 22nd.