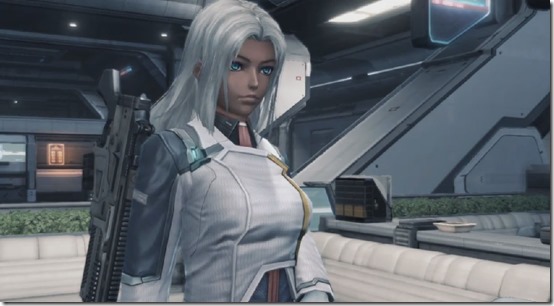 Now that we know the basics of Xenoblade Chronicles X from details in our earlier report, here are details on the advanced battle techniques, and how to handle monsters. 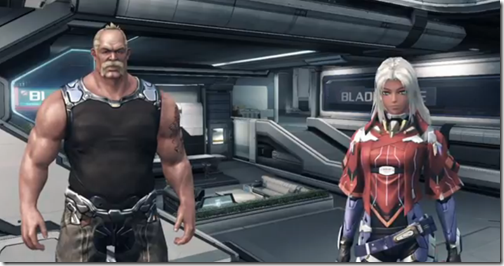 As shown in the previous report, combat mainly consists of auto-attacks using close and long-ranged attacks, along with Arts abilities. Arts are more powerful and sound a lot more appealing to use, but auto-attacks actually have their own benefits, and can be just as important.

In addition to using auto-attacks while you wait for the recast timer of an Art, you can wait even longer until you use it again for a “Double Recast” bar to fill up, which makes it even more powerful upon the next use. 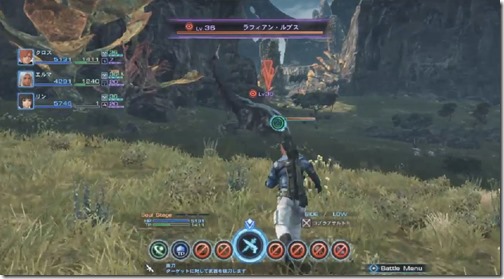 Auto-attacks might be weaker, but as Elma said in Monolith’s presentation, one can think of them as a way of doing a less damage for a short period of time, so you can unleash a powerful attack afterwards. Performing auto-attacks also fills up a “Tension” meter, which can be used to revive fallen allies once it fills up, so it’ll be important to keep up your auto-attacks.

Next up, is the “Overclock Gear,” a system that lets you unleash powerful attacks, but it’s something you’ll get later on in the game. Once it’s activated, you’ll get to continuously pull off Arts, one after the other, as it vastly speeds up the delay, with faster recasts. By successively using several Fighting or Shooting Arts in a row, a number counter will go up with the hits, resulting in massive damage.

Additionally, while using the Overclock Gear, it’ll make it possible to charge an Art to a “Triple Recast,” which makes it even more powerful than the Double Recast. Additionally, other party members can go into their own Overclock Gear, allowing you to do some devastating damage.

Speaking of doing high damage, Xenoblade Chronicles X also has a “part-breaking” feature, that will allow you to break pieces off monsters, similar to what you have in Monster Hunter-style games.

You can break parts off enemies to disable them from using that particular body part or weapon. Once a part is destroyed, it will give you a higher chance of acquiring special items as well.

Monsters have symbols above them that indicate how they will aggro. Some of them do so via sight, while others catch wind of you through sound. Some monsters also team up, so if you hit any of their nearby buddies, the others will join in the fight. Some enemies will attack in hordes, so you’ll need to be careful when there are many bunched up together.

There are also exceptionally powerful monsters roaming around, so if you come across them when you’re at a lower level, it’ll be best to avoid them. Tatsu put it best when he said “running away is one of the most important tactics in Mira!”

Xenoblade Chronicles X will release in Japan on April 29, 2015 for Wii U. The game will also release in North America and Europe later this year.