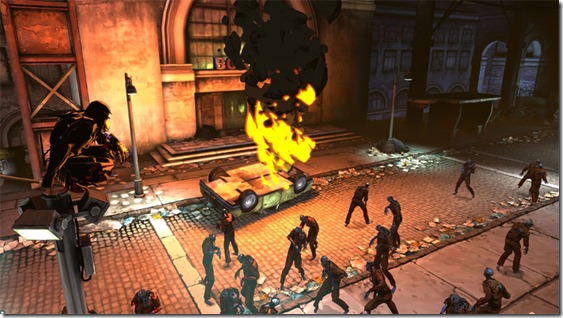 Being developed as a three-way collaboration between Keiji Inafune, Team Ninja and Spark Unlimited, Yaiba: Ninja Gaiden Z is a spin-off of the Ninja Gaiden series, featuring ninjas, zombies and a new protagonist who is on the hunt for Ryu Hayabusa. Just what platform(s) the game is being developed for is unknown, but Spark Unlimited’s current job vacancies do suggest that it uses Unreal 3.

Here’s a listing for a Senior Designer:

Spark is looking for an experienced Senior Designer to create first-in-class content for a 3rd Person Action Slasher game with Horror elements. The Senior Designer will be responsible for collaborating on game design systems, designing/developing levels, and implementing gameplay scenarios including: level construction, basic lighting, event scripting, AI scripting, game balancing, and tuning for a third-person action shooter on next generation consoles.

Requirements and preferred skills in the listing mention the following:

Another listing is for a Senior FX Artist:

Spark Unlimited is looking for a Senior FX Artist to join us in making a breakout hit based on an established console franchise. This is an opportunity for you to have a hand in creating a bold new take on 3rd person action slasher with horror elements. The artist should have a thorough knowledge of the creation of effects within a game environment. The ideal candidate is both an outstanding artist and technically proficient in generating game-useable material. The goal in our particle effects is to capture the graphic quality of effects in anime. This look is typified by complex, realistic motion combined with simplified, graphic, sharp edged rendering. Prior working knowledge of Unreal’s Cascade system is highly desirable.

Requirements and preferred skills in this listing mention the following:

A third listing is for a Senior Graphics Engineer:

Spark is looking for a Senior Graphics Engineer to join us in making a breakout hit based on an established console franchise. This is an opportunity for you to have a hand in creating a bold new take on 3rd Person Action/Horror. With input from team engineers, artists, designers, the Senior Graphics Engineer will implement cutting edge graphics technology within the Unreal 3 engine, as well as ensure proper usage of the graphics pipeline throughout production.

There’s no mention of “action slasher” here specifically, but ” a breakout hit based on an established console franchise” sounds like we’re still talking about the same project, especially since the “third-person action/horror” part is still mentioned. Something to note: a separate listing for another project mentions a “high-profile science fiction franchise,” which could possibly be Lost Planet 3.

Keep in mind that those preferred skills could simply be the qualities Spark are looking for in any Senior Graphics Engineer they hire, regardless of what projects he is assigned to, but it is interesting that they make mention of them with regard to this project specifically nonetheless. Also, while the Wii is mentioned in the list of consoles, we doubt the game will be available for that platform.

Next, a listing for a Senior Engineer:

Spark is looking for an experienced Senior Engineer to create first-in-class content for a 3rd Person Action/Horror title that will take a proven game franchise in an exciting new direction. As a senior engineer you will be tasked with functionality goals to realize the vision for a high profile next-generation property. With input from team engineers, artists, designers in an agile development (SCRUM) environment, implement core game technologies within the Unreal 3 engine.

Responsibilities and desired skills for this job include:

And finally, a listing for a Senior AI Engineer:

Spark is looking for an experienced Senior AI Engineer. This is an opportunity for you to have a hand in creating a bold new take on a 3rd Person Action/Slasher with Horror elements. The Senior AI Engineer must own the quality and goals of the engineering department and lead their group to accomplish their goals. With input from team engineers, animators and designers, the Senior AI Engineer will implement cutting edge AI technology within the Unreal 3 engine.

Responsibilities and preferred skills for this last listing include the following:

“Third-person action/slasher with horror elements” that takes a “proven game franchise in an exciting new direction” sounds a lot like Yaiba: Ninja Gaiden Z. Additionally, a mention of the Xbox 360, PlayStation and Wii gives us an idea of what range of consoles the game might be targeted at (Although, we’re more likely to see this on the Wii U than on the Wii).

Finally, the mention of multiplayer in different job listings isn’t out of place either, considering Ninja Gaiden 3 also has an online multiplayer mode.