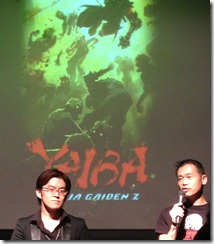 "Last year, I was the one who said the Japanese video game industry was over," Inafune-san joked. "As you may know I’m a great zombie fan. When I left my previous company, my dream was to make a zombie game. I’m very happy to be making this game with Team Ninja. Just as much as I love zombies, I like samurai and ninjas. My dream was to always make a ninja game so this collaboration that I’m announcing today is almost a dream come true."

Thanks for reading our Tokyo Game Show coverage! Here’s a code for Akai Katana: TJVH9-C6C3G-GYC7V-CPCQ2-9KGKZ.