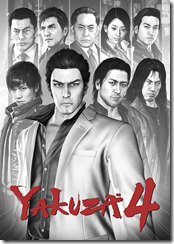 Sega just confirmed Yakuza 4 for the West. That’s a little shy of a year away, but at least we know the PlayStation 3 game is coming. Yakuza 4 introduces new playable characters. Three of them, actually. You can play as a crooked cop, an ex-con, and a loan shark. Each character brawls their own way.

Since this is a Yakuza game you know there has to be loads of mini-games. New for Yakuza 4 is a hot springs table tennis challenge with slow motion staring.

Sega is taking questions for Toshihiro Nagoshi, Producer of the Yakuza series, on the European blog, so forward your questions about cut content and the missing Edo era spinoff to them.

Thanks for the tip Johan!