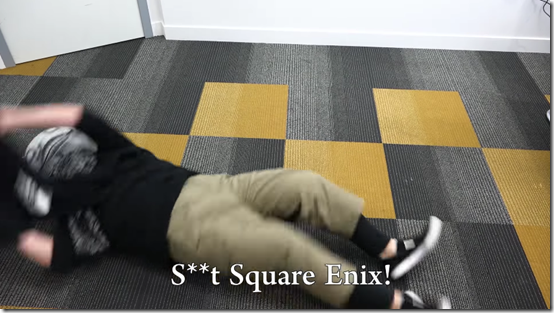 Yoko Taro, the director of a game called NieR: Automata, is known for his many antics and joking (kind of) about how he hopes other games fail when he needs his own to succeed; however, deep down he’s a huge fan of video games and has shown it in his own ways.

The NieR and Drakengard creator was recently invited by PlayStation Blog to talk about some of his favorite PS4 games, which includes Final Fantasy XV that he saw as a bit of a “curse” during its long development.

Here’s what was shared by the man behind the Emil mask:

Hello, my name is YOKO TARO. I did things like direct a game called NieR: Automata. I was asked to give a list of PS4 games that I recommend along with my comment for each so I did just that below. And I was told to write “one to two lines per game” but ended up writing quite a bit. But oh well. It’s okay right? Here it goes.

A crazy developer who throws in a side-scrolling shooter at the PS4 launch window, and a monster born in Finland… that is Housemarque senpai. I thought about listing one of their more recent titles, Alienation, but I will recommend Resogun here instead as that was memorable for me. I always keep an eye out on the games that senpai creates, but the playability of their game that hits the spot as a shooting game, and the way the graphical effects are flashy but not gaudy is striking. I’m very much looking forward to their next title, Matterfall.

I was creating a title called NieR Gestalt/Replicant when this title was called Versus XIII but because it was very likely that our games would release around the same time, I was thinking “oh man, Versus is an action RPG right? It would suck if the release dates were close to each other.” NieR ended up releasing without having to worry about Versus XIII but then, when I was creating Drakengard 3 I thought “it would suck if they release close to our release,” and it was the same again when we were creating NieR: Automata this time too. Looking back, I feel like I was trapped by the curse of Versus for about 10 years. This game and its content created over the course of 10 years is unparalleled and unique, and I enjoyed it a lot. The one thing that surprised me the most is their incomprehensible passion towards food and beverage. FF is amazing.

The thought that came to my mind at first glance was “this world view is amazing.” I had thought that big-title Western games have a strong directionality towards realism, and on the other hand does not often venture into artistic exploration, and so I was stunned that a world filled with such imagination like this title would be created. I immediately preordered the game. Well, having said that, Guerilla Games’ art has been really cool ever since Killzone don’t you think..? By the way, the release date of this game was only one week apart from NieR: Automata, the game I created. I thought I was going to die. Well, I did die. (I just noticed that I keep on talking about release dates…)

This game was released for Vita, but occupies a slightly weird place as it is made in Japan, with unique controls and in a toon art style, but it is not a “moe” game. I feel like recent Western titles are polarized into super AAA titles and indie games, but the Gravity Rush series is a game right around the middle of the two. By the way, I go out to drink with the director Keiichiro Toyama once in a while but the only image I have of him is him being drunk, and I can’t help but think “how can a title like this come from a person like him?”

An abnormal game where you kill people through a class trial: that game is Danganronpa. While it takes an orthodox form of an adventure style game in terms of how it’s illustrated in 2D and mainly revolves around conversations, the game pulls you right into it with its cinematography and the great tempo of the scenario. By the way, I go out to drink with the scenario writer Kazutaka Kodaka once in a while too, but when I saw his piercing eyes that appear as though he doesn’t trust anyone around him, I thought “ah, he does seem like the person that would create a mad game like Danganronpa…”

There is a game called Remember Me that was released for the PS3. It has great artistic taste and I have awarded it my personal “most visually beautiful game on PS3 award” and the company that created that game is DONTNOD Entertainment in France. And as a new title from that studio, I just can’t help but pay attention to… wait, what is this graphic! The direction is completely different! This surprise was how I met Life is Strange. In sharp contrast to Remember Me, this title is about life in school in a quiet city. This title is great with many small youthful moments scattered around the game within the boundaries of restricted expression. By the way, Remember Me is still not localized into Japanese, when is it going to be localized?

I’ve waited seven years. Seven. I love Fumito Ueda’s creations but I didn’t think that I would play after waiting seven years since it was announced. The finished game was beautiful to the very last detail and the content was like a gem. This is a game that I ended up feeling happy to have been able to play while I was still alive.

You can check out Yoko Taro’s full list of recommended PS4 games for purchase on the PlayStation Store.