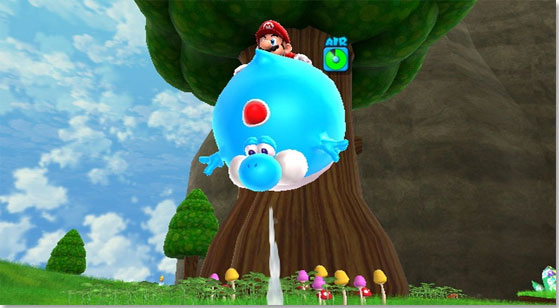 One of the major additions to Super Mario Galaxy 2 is the presence of Yoshi and being able to control the little guy when Mario hops onto his back. While Yoshi’s return is one of the game’s defining traits — to the point that he’s on the cover — he was originally intended to be included in the original Super Mario Galaxy.

In another Iwata Asks session, the game’s directors explain why he didn’t make the cut the first time around.

“Well, if you’re going to put Yoshi in a game, he has to be a main element, but the previous game had spherical land forms and gravity shifts and lots of elements that were entirely new,” revealed programming coordination director Takeshi Hayakawa. “If we’d thrown in Yoshi, too, it would’ve been too much all at once.”

“Even if we had used him, we might have only been able to use him on a single stage,” added Yoshiaki Koizumi, producer on Super Mario Galaxy 2. Koizumi-san directed the original, but took on a producer role for the second game. Initially, the team leaders for Galaxy 2 were rather unenthusiastic about the prospect of developing a follow-up, as they felt they had exhausted all their ideas on the first game, which caused Koizumi some concern.

The introduction of Yoshi, however, turned that around entirely. Following the addition of Yoshi, one of the keywords for Galaxy 2 became “eating.”

“I was just trying to give an example,” recalled Koizumi, with regard to Blimp Yoshi. “I muttered something like “When Yoshi eats a fruit, we should make it so that the players can immediately tell what the effects are, like Yoshi suddenly inflating and starting to float away.” And before I knew it, Yoshi looked the way he does now!”

In fact, Yoshi’s addition to the game caused such a stir that even Nintendo of America staff sent in their own comments regarding the way he controlled. Eventually, everyone’s suggestions piled up and Yoshi became one of Galaxy 2’s main attractions, and raised the spirits of the new directors in the process.

Interestingly, the Mario-shaped ship was also intended be in the original, but didn’t make the cut either, because the team was too busy with other elements of the game. “I was going around telling everyone until I was blue in the face about how I wanted to put in a platform that was a planet shaped like a head, but everyone just ignored me,” joked Koizumi.