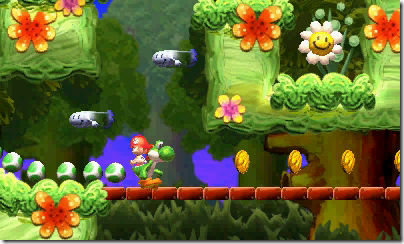 I got to play through the first world of Yoshi’s New Island where you control Yoshi who has to protect Baby Mario. If an enemy hits Yoshi, Baby Mario falls off Yoshi’s back and floats around in a bubble. You have ten seconds to rescue Baby Mario by touching him (protip: use Yoshi’s tongue), but if you can’t save Baby Mario in time you lose a life. Yoshi has his usual abilities like a ground pound and flutter jump that gives him a little bit of a mid-air boost. Yoshi can also eat enemies and turn them into eggs. Throwing eggs is all about timing. When you throw an egg a moving cursor appears that arcs up and down, you have to press A at the right moment to line up your shot. Eggs bounce off walls and can trigger switches in the stage.

The levels I played had collectables like red coins and flowers. This puzzle comes from stage 1-2 where you have to make donut blocks fall so you can avoid a rotating spiked ball.

What’s "new" in Yoshi’s New Island? Not that much, but Mega eggs are one addition. In stage 1-1, there are pipes blocking coins and other goodies. Yoshi can walk a little to the right and grab a mega egg by touching it. Aiming a mega egg is just like firing a regular egg. The difference is mega eggs can open new paths for Yoshi and Baby Mario by breaking pipes. Mega eggs bounce more too and the gauge at the top of the screen fills up when you smash stuff. You can earn a 1up each time you a bar is completely full.

Yoshi’s New Island also has binoculars that let you scan the layout of the level by moving around the 3DS. This was demoed in the first level right before Yoshi finds the mega egg so you can clearly see a hidden area that was outside of the usual camera view. 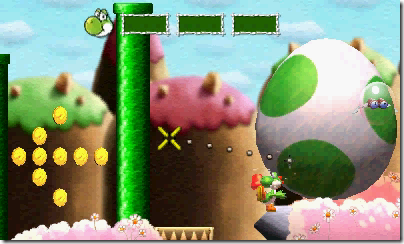 Yoshi’s New Island is on track for release in 2014. Wii Play developer Arzest which has many former Artoon and Sega staff is making the game.