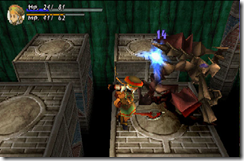 Square Enix, sticking with their Twitter-nouncement, put Threads of Fate on Japan’s PlayStation Store. You can download the PsOne classic for a mere 600 yen ($6.60).

Threads of Fate has two playable characters, shapeshifting Rue and selfish Princess Mint. Rue and Mint cross paths in the story, but each of them has their own tale and reason why they are seeking a legendary relic.

So far, Square Enix has not announced plans to re-release Dewprisim in any other region. We’re still waiting for Vagrant Story, another game in Squaresoft’s “Summer of Adventure” series in North America.