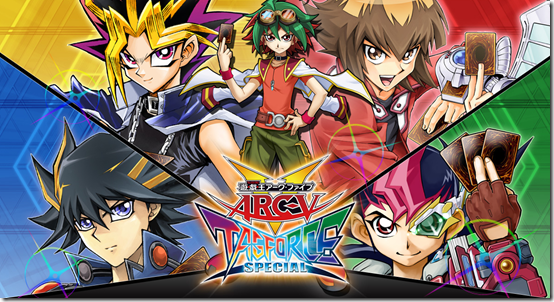 Konami’s upcoming PSP title, Yu-Gi-Oh! Arc-V Tag Force Special was announced earlier this month, and will have over 7,000 cards including some from the Secrets of Eternity boosters. The official website shares a few more details on the game.

While details are still pretty limited on the recently launched website, it mentions that Yu-Gi-Oh! Arc-V Tag Force Special will feature the protagonists from all five series thus far, and will even have the anime-based stories for the five of them.

So far, they’ve revealed five characters of the following: Yugi Mutou from the first series, Jaden Yuki from Yu-Gi-Oh! GX, Yusei Fudo from 5Ds, Yuma Tsukumo from Zexal, and Yuya Sakaki from Arc-V.

The website mentions that the above characters can be selected as partners, and it looks like each series will have two additional partners to go with the protagonists, so we’ll likely see the likes of Joey Wheeler (Katsuya Jonouchi) and Seto Kaiba join Yugi, and so on.

Additionally, the game will also feature the new Pendulum Summon rule that was introduced in Arc-V. This feature and others such as Synchro and Xyz Summons will also be available while playing story parts of earlier series when they didn’t exist.

Yu-Gi-Oh! Arc-V Tag Force Special will release this winter in Japan for PSP. The game will also be compatible with the PlayStation Vita.