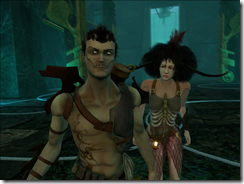 Last year, Zeno Clash was nominated as a finalist for an Independent Games Festival award. This year, it’s coming to Xbox Live Arcade under the name Zeno Clash: Ultimate Edition.

ACE Team’s game is a first person brawler, sort of like Breakdown with an organic feel. Ghat is the lead character and is on the run from his siblings. In this interview, we asked ACE Team how Zeno Clash got started and how they got together with Atlus.

When you sat down to develop Zeno Clash what kind of game did you have in mind?

ACE Team: The very first version of Zeno Clash was called Zenozoik and we built a prototype around the year 2002-2003 on the former Lithtech Jupiter System (the engine used for the game No One Lives Forever 2). That game was too ambitious for us at the time and we eventually abandoned it. But after a couple of years, we gathered as a team and decided to re-design Zenozoik into something focused with a strong core design based on first person melee combat and with a more surreal art style. That is how Zeno Clash was born.

And how did Zeno Clash change from your original design?

Our original game had the problem that it had too many features and none of them were executed with a satisfying level of execution. So when we redesigned the game we took what we felt were the best and most interesting features and transformed that into the core of the game. As a result, first person melee combat became the priority and we concentrated a lot of effort into developing strong fighting mechanics. 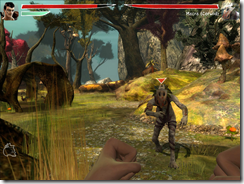 The game’s style is quite different. What inspired the organic look and was it difficult to get the Source Engine to do what you wanted?

We got inspiration for the organic art style from atypical sources for a videogame. Examples are the paintings of Hieronymus Bosch and John Blanche’s punk fantasy art of the 1980’s.

Creating very organic art using Source was a big challenge for the team. Source is optimized for brush based geometry (boxed shape primitives), so we needed to re-think how we would do environments in the game. We eventually had to upgrade the static mesh class (regular 3d models that can be placed in environments) so that we could use pre-baked lightmaps with them. This allowed us to do completely organic and better lit environments. The way we build environments is completely different from how Valve builds their environments for Half-Life or Left 4 Dead.

Tons of indie developed games are released every year, few of them get published on consoles. How did Zeno Clash get noticed and when do you think you "hit it big time?"

Being nominated as a finalist in the Independent Games Festival (in the category of Visual Arts) was great, but I think the real reason Zeno Clash is getting the attention it is getting is because it is so different.

While many indie games are very unique & creative, there are few that venture into competitive mainstream genres and innovate from there. Most indie games are 2D and more retro-style in design. I think that innovating in such a complicated genre like first person games is a challenge of its own because you not only have to excel in the creative component, but you also have to compete in the production part of game development – something that is very hard these days since AAA games have very high budgets.

That is where I think Zeno Clash is unique among indie games: It gets confused and mixed up with mainstream titles. 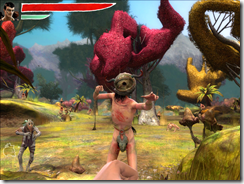 How did you hook up with Atlus?

They contacted us. We had already been discussing with Microsoft about a XBLA version and then we had the chance of teaming up with Atlus.

What are the advantages of working with a publisher, like Atlus, opposed to going on your own and distributing Zeno Clash on XBLA on your own?

You cannot distribute games on XBLA without a publisher. But besides that the obvious benefit is having someone who will push and promote your game in the market in a way that you as an independent game studio cannot. Even though the game is due for March, we are already working on producing marketing material and content with them, and this is great since they know this part of the business much better than we do. Atlus has also been very good at suggesting what features will help improve the game.

Did any feedback from the PC game lead to changes/tweaks for Zeno Clash: Ultimate Edition?

Definitely! The inclusion of co-op and other features like adding more attacks were things that fans requested many, many times.

What are some of the challenges you encountered when bringing Zeno Clash to Xbox Live Arcade?

For a number of reasons we had to move from the Orange Box Source engine build to the Left 4 Dead version. It was a bit scary at first since many things broke down and it almost felt like taking a step back, but the switch definitely paid off. The relative ease with which we were capable of integrating cooperative gameplay to the tower challenges was thanks to that decision. There are some tricky parts to working with a console, but fortunately we haven’t hit any brick walls.

We heard the Xbox 360 version has "Tower Challenges." Can you tell us more about those?

The tower challenges are present in the PC game, but the Xbox 360 version will have co-op for this game mode. Now you will be able to beat up enemies with a buddy via Xbox Live or split screen which is twice as much fun! 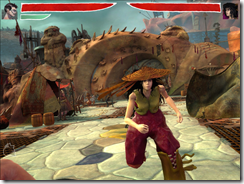 Are there enhancements or features in the Xbox 360 version?

There are many. We’ve included several new attacks for the player, new weapons, new enemies and other surprises that we will be revealing soon.

How come Zeno Clash is only for the Xbox 360? Have you thought about a PlayStation 3 version or a Wii game where we can punch things with the nunchuck a la Breakdown?

The Source engine is only ported to the Xbox 360 so there isn’t much we could have done about it. Porting the whole engine to another console is something that simply exceeds our possibilities as a smaller independent studio.

After Zeno Clash, what’s next? Can you tell us anything about Zeno Clash 2?

A sequel has been planned and other stuff too. We’re always thinking of creative new content at ACE. Zeno Clash 2 is an ambitious project and not something we want to rush as a mere expansion pack or something similar. So there’s not much I can reveal about it so early. Still, Zeno Clash 2 will not be the only new project we will be working on this next year.