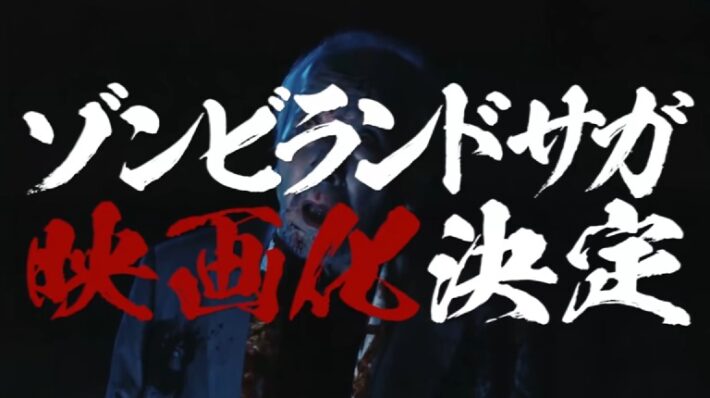 About three years after the initial airing of the first season, Zombie Land Saga will have a movie adaptation, starring actors from the Saga Prefecture. This announcement came during the Zombie Land Saga live event on October 17, 2021 in Japan. There’s an announcement trailer for the movie on YouTube. However, little of what the movie will be about is shown. [Thanks, Famitsu!]

The trailer features actors Hakuryu (Yakuza Kiwami 2, Kaiji: Ultimate Survivor) and Kunio Murai (Tokyo Ghoul, The Return of Godzilla), who both come from Saga. “Zombie Naki Tatakai” or “Battles Without Zombies” is the title of the video. It’s a reference to Battles Without Honor and Humanity. This sort of parody video is similar to the Yoshi Ikuzo Enka music video Capcom released for Resident Evil Village earlier this year.

The two actors have a tense standoff, talking about vengeance and what one has left. While the actors play the scene straight, they repeatedly use the word “Saga” like it is a catch-all term. When Murai says, “I also loved Saga,” Hakuryu replies, “If you loved Saga, then why didn’t you yell Saga more? If you were serious, then Saga would be more Saga.” To that, Murai simply responds, “You don’t understand Saga.”

You can watch the Zombie Land Saga movie announcement trailer below.