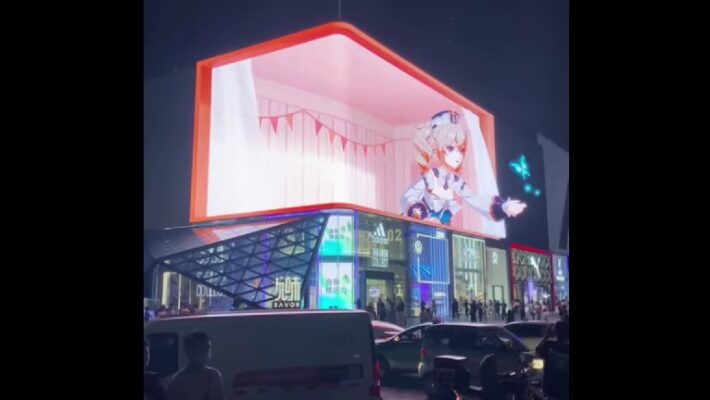 Mondstadt’s favorite idol Barbara has been busy promoting Genshin Impact in the game’s native country of China with a huge 3D billboard. In the short video that is making rounds on Bilibili (and is also available on YouTube), Barbara opens a window and waves at the crowd, reaching out at times to catch a Crystalfly. [Thanks, Hanabi Network and Luankana!]

According to Luankana, their miHoYo friend sent this into their friend group. Whether they mean their friend who enjoys miHoYo games or an actual acquaintance who works at miHoYo is a little unclear. The Genshin Impact Barbara 3D billboard seems to be in Chengdu Taiguli in the Jinjiang district. Aside from collecting a Crystalfly, Barbara also opens up a slime gift to reveal an ad for Genshin Impact.

This is not the first time that miHoYo used Barbara to promote the game as if she is an idol or VTuber. At the beginning of 2021, it posted a short video in which Barbara answers questions as if the viewer is having a conversation with her. During the video, she shows off her secret journal, as well as mentions her love of Spicy Dried Fish.