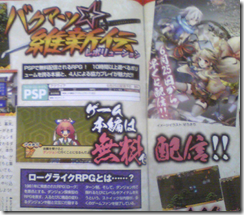 Acquire, the studio behind quirky games like the Badman series and Patchwork Heroes, have another PSP game in development. Famitsu lifted the curtain on Bakumatsu Revolution, an Edo-era roguelike with four player co-op.

The interesting thing about Bakumatsu Revolution is it’s free. Well, at the least a core part is free. It appears Acquire will sell additional content on the PlayStation Store, but the print in the scans is too eye-straining to get any more details. Definetly curious to see how Bakumatsu Revolution is recieved. A microtransaction-only game made for PSP is a first the publisher and PlayStation Network.

Look for Bakumatsu Revolution on June 25.