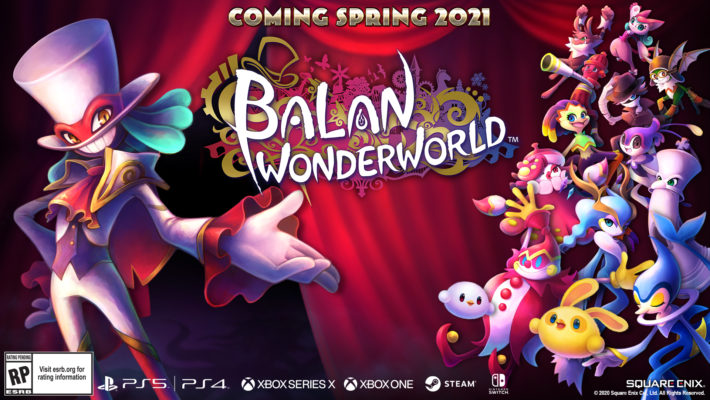 Balan Wonderworld, Square Enix’s first Balan Company game, was announced during the Xbox Games Showcase July 2020 pre-show. Yuji Naka and Naoto Ohshima, who are known for games like Sonic the Hedgehog, NiGHTS, Billy Hatcher, and Phantasy Star, are the two creative forces behind this new action game. Naka is the director, while Ohshima is the character designer.

Here’s the Balan Wonderworld trailer. It has some serious NiGHTS and Billy Hatcher vibes. Players will head into 12 different stories to help people, taking on special abilities from costumes to help get through areas and overcome challenges.

While the Xbox Games Showcase July 2020 pre-show only confirmed the Xbox One and Xbox Series X versions of the game, additional platforms appeared shortly after. It will also appear on the Nintendo Switch, PlayStation 4, PlayStation 5, and PC.

From the creators of Sonic the Hedgehog comes a new action-platformer, wear over 80+ costumes and use your powers to restore happiness and balance!

Step into a theater filled with wonder on #Xbox, #PS5, #PS4, #NintendoSwitch & #Steam in Spring 2021 pic.twitter.com/0ECRvAsdH1

This is only the first Balan Company project. Square Enix confirmed the action game brand will be an opportunity for different people within Square Enix and from its partners to come together for new creations.

Balan Wonderworld will come to the Nintendo Switch, PlayStation 4, PlayStation 5, Xbox One, Xbox Series X, and PC in Spring 2021.