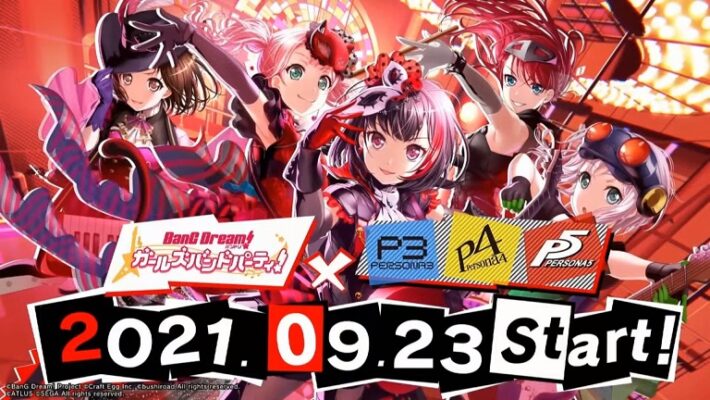 The Japanese version of BanG Dream! Girls Band Party! will re-run the Persona collaboration starting from September 23, 2021. This event originally went live in 2018, and the gacha focused on Afterglow. While the collaboration will feature covers of songs from Persona 3, 4, and 5, the Afterglow girls are all wearing Phantom Thieves outfits from Persona 5. [Thanks, Bandori_Updates!]

Afterglow covers “Reach Out To The Truth” from Persona 4, whereas Roselia covers “Kimi no Kioku” from Persona 3. Lastly, Poppin’ Party sings their version of “Life Will Change.” Excerpts of these songs on Expert mode are available from the official BanG Dream YouTube channel.

Aside from the Persona collaboration re-run, BanG Dream! Girls Band Party! will also have an event with Hololive. Rather than have a gacha, the event will feature three songs covered with the help of Hololive VTubers. They will also have promotional streams. The Hololive collaboration will take place in late October. The VTubers involved are Tokino Sora, Minato Aqua, and Shirakami Fubuki.