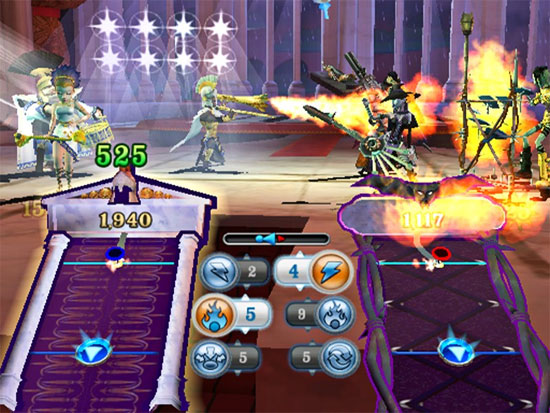 Music games and I have a rocky history (apparently so do bad puns and I). I never got into Guitar Hero or DDR, but I love Pop'n Music. I can't seem to figure out what it is that makes me like or dislike a music game. So I was cautious going into Battle of the Bands. I wasn't really sure what I was getting myself into. Was it going to be a bad "Guitar Hero with Wii Remote" knockoff, or something that was actually enjoyable? Well, as it turns out, it's…kinda middle-of-the-road. But it's not without it's high points.

When you start Battle of the Bands, the first thing you'll notice is the relative lack of options, compared to other music games. There's Adventure Mode, which is the standard single player mode, and Versus mode, which allows you to play against either another player or the AI in a single song. There's also the option to listen to any of the game's songs in the Bonus menu. This is something that I wish more music games had. There's been several times that I've played a song in Pop'n Music just because I wanted to hear it, not so much because I wanted to play it. 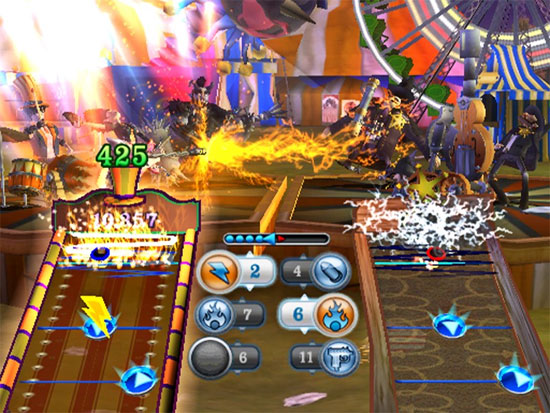 Battle of the Bands' biggest selling point is it's songlist. While there's only 30 songs in the game, each one is done in five different styles (Latin, Rock, Marching Band, Country, and Rap). Which essentially brings the songlist up to 150 songs. But you won't be able to directly choose which version of a song you want to play. Let me explain using Adventure Mode as an example. When you start this mode, you choose one of several bands, each representing one of the game's five musical genres. You'll then pick a stage to play. Let's say you pick a rock band, and the stage you select has you going up against a rap group playing Insane in the Brain. The stage will begin with the rap version of the song playing, but as you hit more notes the song will switch to the rock version of the song. The entire point of the game is to keep the song playing in your style for as long as you can, henceforth scoring more points.

The actual gameplay itself is fairly simple, really. First of all, it's worth mentioning that unlike Guitar Hero, you're always playing against someone in Battle of the Bands, whether it be the AI or a second player. It reminds me a bit of games like Puyo Puyo or Columns III in this respect. There's a Guitar Hero-like "slider" on each side of the screen, and notes scroll upward from the bottom of the screen towards a line near the top of the slider. When the note gets to the appropriate point, you shake the Wii Remote in the direction that the note indicates (either left, right, down, jab at the screen, or shake the Wii Remote quickly from left to right). As you hit notes, every once in a while you'll get a note with a symbol on it, which, if hit, will launch an attack at your enemy. These attacks can have various effects, like making your opponent's notes smaller or speeding up their slider. There's also normal attacks that take a notch of your "Song" meter if you're hit with them (or vice versa if you hit your enemy with them), and when your Song meter runs out, the song switches to the opponent's genre. You're prone to these attacks too, however. Fortunately you can block them by hitting B at the right time. The game does a fairly good job at recognizing the gestures you make with the Wii Remote, with the possible exception of the "jab" motion. But then again, I've yet to play a Wii game that recognizes the "jab" motion well. You'll most likely tire your arm out after a few songs (I know I did) due to all the movement required. It seems the developers knew this, and included reminders to take a break between every few songs. I thought that was a pretty nice touch, and I'm also pretty sure it's the first third party game I've played for the Wii that does this. 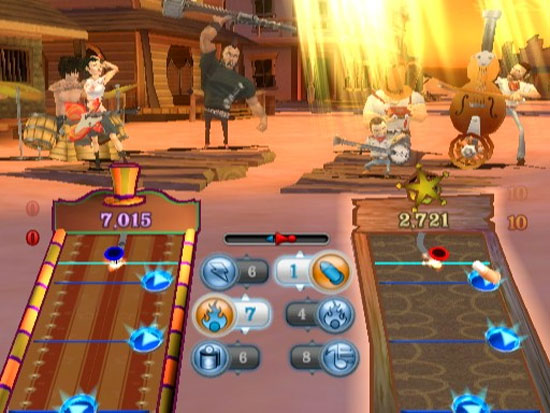 Sadly, for as well designed as the gameplay is, it's just really not that fun in the long run. It lacks the addictive quality of other games in the genre. And while I complimented the ability to listen to any of the game's songs through the Bonus menu earlier in the article, that particular feature hurts the replayability of the game even more, as it takes away the only really good reason to play through the game in the first place. There's really no reward for clearing the game, either. No hidden songs or hidden bands or anything. Every song in the game is even available in Versus mode from the get-go. In all likelihood, you'll probably play though the game once, and then never touch it again, aside from if you have friends over, and even then you'll probably just show them the songs using the Bonus menu.

As I said before, the best part of the game's overall presentation is the music. It's really cool to hear the songs in the game done in the various styles. Really, hearing "Black Betty" in goth-rock style or "Insane in the Brain" done in Latin (complete with Spanish vocals) is awesome. Aside from that, though, the other really cool part of the presentation is the story sequences before each stage. These scenes have a member of your band talking to a member of the opposing band, and they range anywhere from funny to downright hilarious. Sadly these scenes are conveyed with static pictures of the band members and word balloons. Not that I have anything against reading, but it would have added a lot of personality to the game if these scenes were fully voiced. The biggest problem with the game's presentation has to be the fact that if you miss a note during a song, it's not reflected in the actual song. You know, like how in Guitar Hero if you miss a note, that note won't play in the song? Yeah, that doesn't happen here. Though I suppose the fact that you're not the only one playing the song kind of explains this. Still, it'd have been nice to have some kind of audio alert that you missed a note. 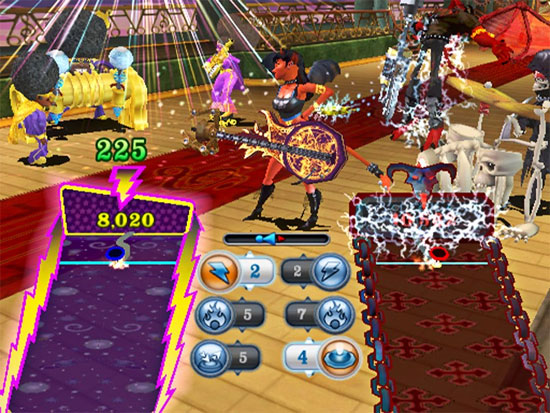 Battle of the Bands really surprised me. I was really expecting nothing more than a quickly made ripoff of Guitar Hero, but as it turns out the game has a style and personality all it's own. It's just unfortunate, however, that the gameplay doesn't really match the quality of the presentation. While the game is fun, it really doesn't live up to other music games, and probably won't leave you coming back for more. However, it's a good introduction to the music game genre, so if you know someone who thinks Guitar Hero looks cool but is too complicated (or too expensive), point them in the direction of Battle of the Bands. For experienced fans of the genre, Battle of the Bands could be a fun diversion, but you won't get a lot of mileage out of it. At $50, it's also pretty expensive for what you get. I really can't recommend the game at that price due to the lack of substantial replay value, but once it drops to $30 or so, I'd say to give it a look. The variety of the music and the fact that the game is fun in short bursts would warrant a Research at that price. Until then, however, Battle of the Bands should stay firmly in the "rental-only" category.

(Oh, and you have no idea how hard it is to play a game like this when you have a three month old kitten who thinks it's her job to attack everything that moves. Including the Wii Remote.)