The world is in peril again, a black knight rises from mist, a mysterious girl is the key to it all and a young sword wielding hero is out to save the world. Sure the story sounds like something you’ve heard before in countless RPGs and you’re going to hear it again in Blade Dancer: Linage of Light. It’s got all of the clichés of a traditional RPG story and most importantly gameplay that genre fans have come to expect. So what makes Blade Dancer: Linage of Light stand out? Find out here. 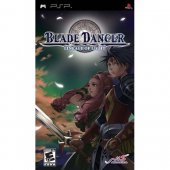 First it is worth noting that Blade Dancer: Linage of Light is for the PSP where RPG games have been lacking except for a few releases by Namco Bandai games. Instead of trying to reinvent the wheel, Blade Dancer tries to give gamers what they expect in a Playstation-era RPG with portability. So what does that mean exactly? Lots or running around exploring the world and doing fetch quests for the villagers. On the world map enemies represented by different colored floating skulls will chase the hero, Lance, and his party. The group can easily run faster than an enemy in pursuit so players can avoid battles whenever they want to, but since battling random enemies is essential for progressing through the game there isn’t much incentive to dodging fights.

On the plus side combat in Blade Dancer is one of the stronger points of the game. The system is a hybrid of the action battle gauge system seen in the Final Fantasy series. On the bottom of the screen a moon rotates clockwise and when it reaches the 12 ‘o clock position that character can attack. At the beginning of a battle you’re going to be limited to using attacks only. Each sword swipe or enemy bite adds power to the lunar gauge bar on the top of the screen. All special attacks (named lunabilities) require power from the lunar gauge. There are all sorts of lunabilities such as Lance’s fire based “Blast Blade”, curative spells from Tess like Empathy and group attacks to do massive damage. There is an interesting twist to the battle system in Blade Dancer. The lunar gauge is shared between all of characters in combat, including the enemies. So all that energy you’re saving up for a devastating group attack can be used against you to wipe out the party. The system requires more thought later on in the game when you have stronger attacks. Is it worth it to stock up energy and risk having it used against you by a boss monster? Another strategy to use is constantly draining the lunar gauge so enemies can’t take advantage of using special attacks.

If there is one annoying quirk about the combat system it has got to be weapon durability. Each time a weapon is used it gets closer to breaking down. The only way to prevent this is to restore the weapon in town or better yet appraise it to learn the recipe for the rare bow you found. The advantage to learning the recipe is that you can rebuild the same weapon any time, as long as you have the raw materials to do so. There are also extra recipes players can discover by doing side quests. Gathering the bonus recipes and necessary crafting supplies can give players powerful equipment early on.

We’ve saved the best feature in Blade Dancer last, which is the ad hoc multiplayer gameplay. If you have a couple of friends with PSPs and extra copies of Blade Dancer you jump into special multiplayer dungeons. During multiplayer mode players take control of their own character in the dungeon. Also to balance everything out players have to search for equipment once they arrive in the new dungeon. The goal of each dungeon is to work together to open gates and finally defeat a boss monster. It’s a really cool set up and it is too bad that it is ad hoc only.

Blade Dancer: Linage of Light is a sharp looking RPG with all of the features that RPG fans expect from a game. The major problem with the whole system is that it feels like every other RPG out there. Even with the modified battle system and excellent online mode, Blade Dancer doesn’t go out of its way to differentiate itself with its characters or storyline. That’s what makes the early hours of the game rather uninteresting because it isn’t a game that grabs you to play it. However, all those gamers out there who have been seeking a solid PSP RPG should give Blade Dancer: Linage of Light a shot.

+ Pros: All the standard stuff you want in an RPG with decent graphics and a great online play mode.

– Cons: The story is probably the most disappointing part of Blade Dancer: Linage of Light.

Overall: In some ways Blade Dancer: Linage of Light is derivative, especially in the story department. Where the game shines is in network play, which unfortunately few people will get to experience.