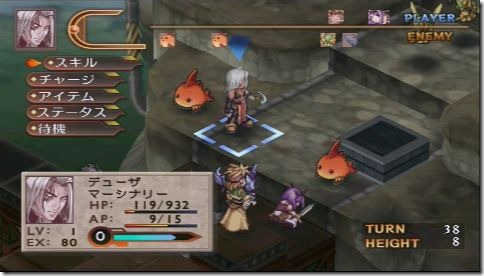 Blazing Souls Accelate twists how terrain is used in a strategy RPG. Idea Factory merged the adventure map and battle map into one giant map. Before enemy encounters, you can search for hidden towns and change the topography. Effects on the terrain change the battlefield too.

Blazing Souls Accelate’s  tale is part of the ever-growing Neverland universe. Here’s how Aksys describes it.

It has been years since a war called the Seven Year War ended and peace finally arrived in the land.
The story begins with Zelos* the protagonist making his living as an independent contractor. One day he is investigating a certain site. It is there that he finds a mysterious stone infused with a powerful magic known as the Core Elemental. As he takes on more and more jobs to investigate other locations, he discovers more and more Core Elemental stones. On his travels, he begins to encounter the Human Genomes—new creatures created by God to replace mankind.

One thirsts for power.

One desires only the eradication of mankind.

And one hopes to retrieve what he has lost.

To get what they desire, each one appears before our protagonist. Through his battles against the Human Genomes, our protagonist begins to learn the truth about the secret of his birth, and before long finds himself at the very place where he was born…

Finally, he will learn the truth of his existence…

Aksys is publishing the PSP game, which is actually a remake of a Japan-only PlayStation 2 game, this year.