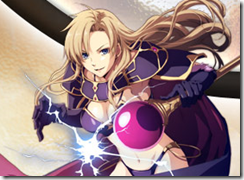 Ys vs. Sora no Kiseki: Alternative Saga is essentially Super Smash Falcom. In addition to the Ys and Sora no Kiseki universes, there are a handful of support characters from other games like Dela.

The scantily clad sorceress from Brandish: Dark Revenant is confirmed for the mashup fighter as support character. Call Dela and she’ll cast mistake magic which draws enemies towards you.

Gurumins from Gurumin: A Monstrous Adventure also play a supporting role. Summon them to make your character see-through.