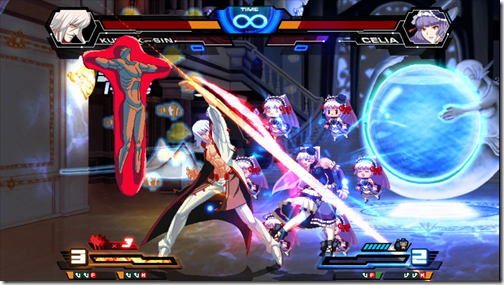 Chaos Code from Taiwan based developer FK Digital will come out in America. The game was released for PlayStation 3 in English for Asia regions like Hong Kong, Singapore, and Taiwan last year. Arc System Works is helping them bring Chaos Code here.

Chaos Code is a 2D fighting game with an eclectic cast of characters. The main character, Hikaru Otagi, is an otaku who hangs around Akihabara collecting figures. He’s contacted by Kagari to get the Chaos Code, which everyone in the game is fighting over. Cait & Sith are two characters in one and they are tiny in comparison to other fighters. Two characters are always on screen Cait & Sith can team up to extend their range. Vein is a badass with a sword and Bravo Peperoncine (my favorite character!) is a grappler that cooks opponents in bamboo steamers. The PlayStation 3 version also adds Kudlak Sin, the final boss, as a playable character.