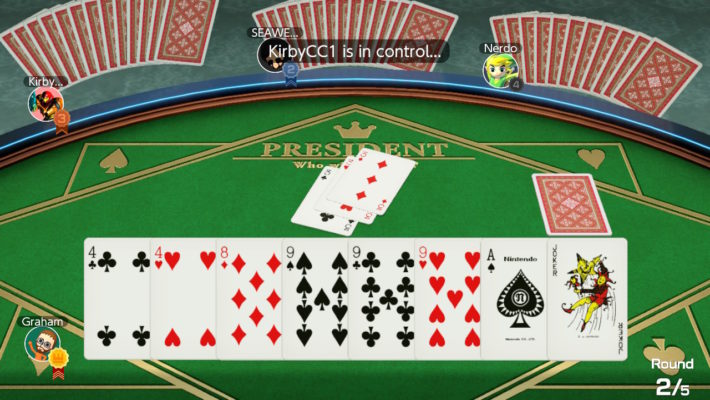 Clubhouse Games is back! The early Nintendo DS classic game collection was a hit with many, due to its clever and well-executed use of the system’s multiplayer functions. Those veterans looking for something similar from the new game, Clubhouse Games: 51 Worldwide Classics, may find a feeling of unfamiliarity in these familiar options.

There’s a lot in 51 Worldwide Classics to recognize. The overlap between the new game’s titles and the DS original’s 42 is significant, and most of the new additions feel right at home alongside them. The bulk of the collection’s focus lies on card games, once again celebrating Nintendo’s playing card past. There are even some, uh, “games” like War, here for you to feel nostalgic. And a piano! The piano is not one of the 51 games.

The offering of tabletop toy-style games has increased in this installment. Some of these feel like Wii Play games. Some remind you a bit of Wii Sports. And some are their own sort of weird thing! All have a tabletop aesthetic that helps them blend in a bit more with the collection and justify their less-than-realistic handling. 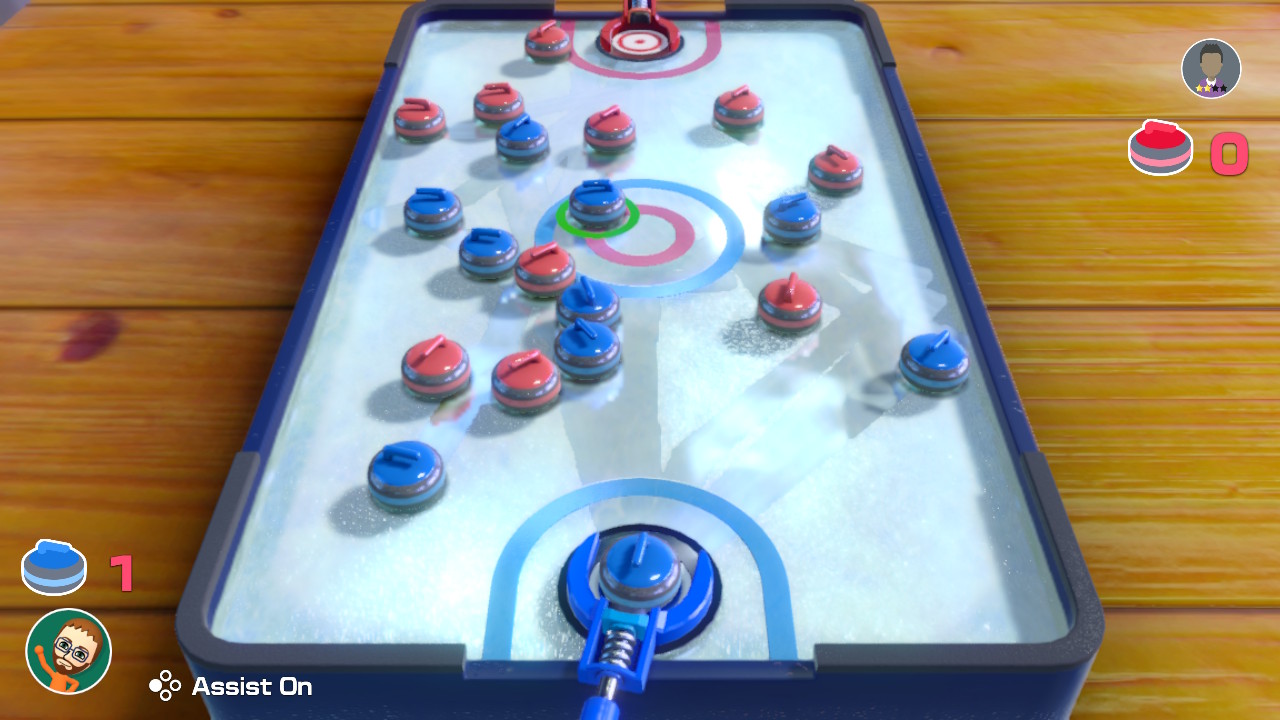 Why Clubhouse Games: 51 Worldwide Classics feels so different, besides of course the huge time gap since the last one, is its change of developer. The original was made by the mercenary team at Agenda, a developer that has apparently exited the games market. 51 Worldwide Classics is helmed by longtime Mario Party developer NDcube. And it’s easy to tell! Whether it’s the 6-Ball Puzzle game literally pulled from Mario Party 9 or some games that feel eerily similar to some of the team’s Wii Party efforts, there’s a house feel that’s very much here.

It has its good and bad points. NDcube has years of experience quickly explaining games, and in making controls that do what you think they’ll do on a first attempt. This works fairly well with these folk games and diversions that are meant for accessibility. The system of “guides” and the narrative intros do get in the way a bit, as they don’t quite serve a purpose. (We’ve heard some like the whimsy, though!)

Still, the “How to Play” sections are smartly crafted, and should get you in the game and able to play without too much delay. In-game, there are a generous offering of contextual displays, showing you what you can and can’t do as you learn to play. This is a great help! Across the collection, you’ll find wide and generally intuitive touch screen implementations, and with a lot of the games, these controls end up being the fastest and easiest. Of course, for TV play, that’s not really an option. The buttons and sticks are serviceable enough, if a bit slower.

Where things go less smoothly is in long-term play. The AI is highly inconsistent between games, with some (like Mancala) being straight-up awful even on high difficulties and others challenging on Easy. This is largely irrelevant if you’re focusing on playing with other people, which is certainly the aim of Clubhouse Games, but it’s something to remember between social sessions.

The selection also focuses heavily on two-player games, only supporting a fraction with more people. Perhaps it’s Nintendo’s guiding hand focusing the package on two Joy-Cons. Perhaps it’s the Super Mario Party team saving all the ideas it can for a game that needs to support that many players at all times. Either way, you’re going to have more to play if you meet up with a single friend or family member.

About those multiplayer options! The team at NDcube did well to offer same-screen play when possible, a free downloadable app for local wireless play for games with hidden information and a robust online offering that includes almost all the games. 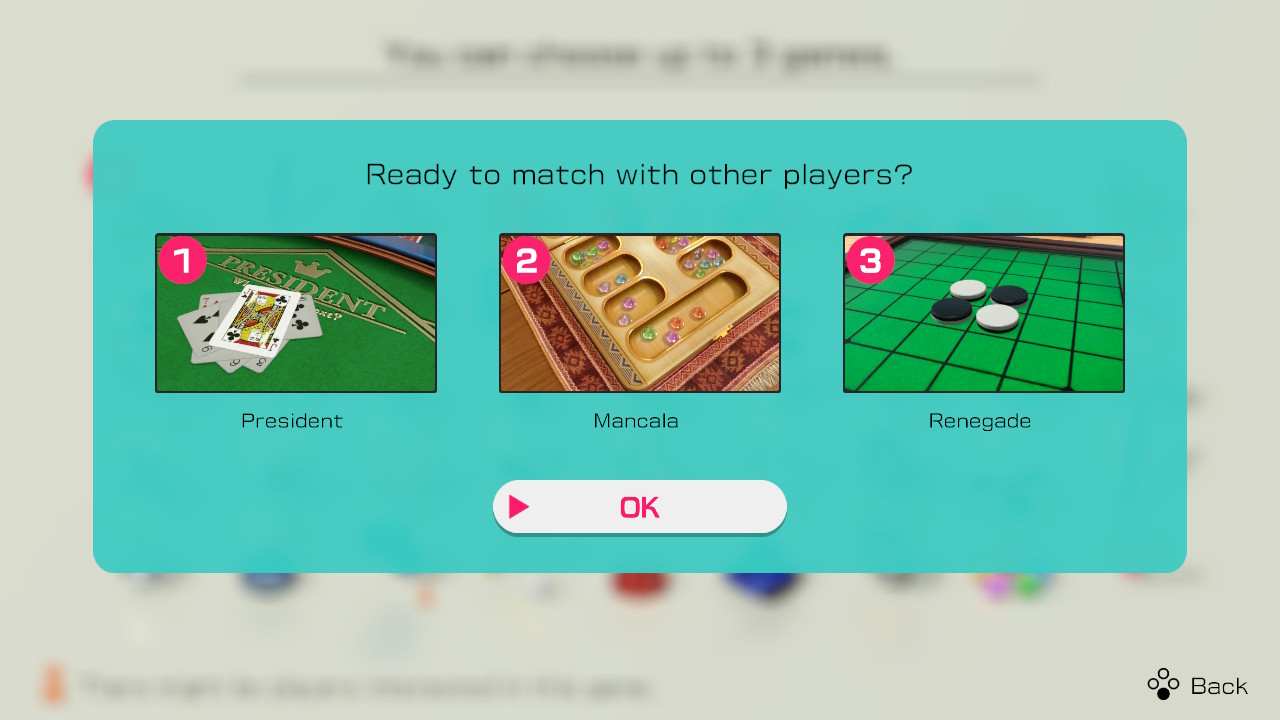 Online play, outside of private friend lobbies, is driven by a system that lets you pick multiple possible games for easier matchmaking. There are some classic Nintendo-style online hiccups here and there, but it’s way less noticeable in this collection. Perhaps it was designed with that in mind? There aren’t a lot of play moments in which timing is crucial, which helps quite a bit.