With the exception of Lumines Live’s piecemeal microtransaction system Q Entertainment has been on a role with developing quality puzzle games. That’s probably the reason Bandai Namco Games choose Q Entertainment to rework their WonderSwan puzzle game Gunpey for the PSP and Nintendo DS. Or possibly it was because they have a history of publishing Q Entertainment’s titles in Japan. Gunpey itself has an interesting history. After the failure of the Virtual Boy the Game Boy creator, Gunpei Yokoi went over to Bandai to develop the WonderSwan. However, he passed away before the system went in the hands of gamers. To honor the innovator the first game was named in his honor. The original game appeared in Japan and the PSP remake appears in the USA first. 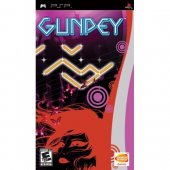 Gunpey is played on a 5×10 grid where four kinds of lines appear. There are two diagonals (one faces up and one faces down) and two V shaped arrows (same deal one faces up and one faces down). These lines progress from the bottom of the screen to the top and the player has to connect the lines to make a horizontal line, called a “Gunpey” out of the pieces. Naturally the lines don’t come connected so you’re going to have to swap panels up and down by pressing the square button. Like most puzzle games the first skins in Gunpey are simple where the lines slowly creep to the top and as you get better the pace picks up. Soon you’re going to realize that basic horizontal lines aren’t going to cut it. You’re going to have to get creative. A simple horizontal line can be extended a piece or two by adding on branches or tails to clear more pieces. Another trick is to place an upwards facing arrow and a downwards facing arrow on the same line to clear both pieces. The real key to the game is being able to build two lines at once and then connect them at the end, but there’s a problem with that too. If you go for the double line strategy you have to wait for the perfect piece, sort of like waiting for the long skinny line in Tetris. If you wait to long and the arrows reach the top of the screen its game over. No second chance and no retries, one mistake ends the game.

Now if you were playing the traditional version of Gunpey you might not care too much except that you lost your score, but in the PSP game you’re going to want to last as long as possible. Similar to Lumines Gunpey has skins, themes on each level with different animated wallpaper and techno beats. After you reach a skin in challenge mode it is unlocked and you can freely play on it. While most of the skins are cool some are quite distracting with flashing lights blinking in the background. Also the lines in Gunpey are narrow green sticks, which doesn’t help when you’re searching for them in a sea of color. There are Gunpey for the PSP has the same trendy nightclub feel as other Q Entertainment titles on the PSP. It even has familiar beats, USCUS an qp both had their music featured in Every Extend Extra and they appear in Gunpey with new songs. Gunpey also has a few gameplay tweaks over the WonderSwan game. Break rules clear the spaces when you make a Gunpey, which makes all of the lines successively fall down. It makes earning the skins slightly easier than playing in original mode. If you want a real challenge you can play Gunpey with a 10×10 grid. It’s the same game only with more lines and you have to make a horizontal line ten squares long.

While Gunpey is a stylish game it isn’t as entertaining as Q Entertainment’s other games. One of the problems with Gunpey is that it is very unforgiving. There is no magical comeback piece like the special block in Lumines and you don’t have plenty of time to recover from a mistake like Tetris. Another problem with the set up is that if you’re trying to move a broken piece of a line up to clear lines at the top it will automatically form a Gunpey if it can connect with any other lines. Unless you carefully break horizontal lines apart, clearing the pieces at the top can quickly become a problem. Instead of playing the game for hours like Lumines you’re going to be restarting Gunpey at skin one more times than you would like. But maybe there are people out there who want a puzzle with a steeper learning curve, if that’s you Gunpey is worth a look. Otherwise don’t be swayed by Q Entertainment fandom, try it first.