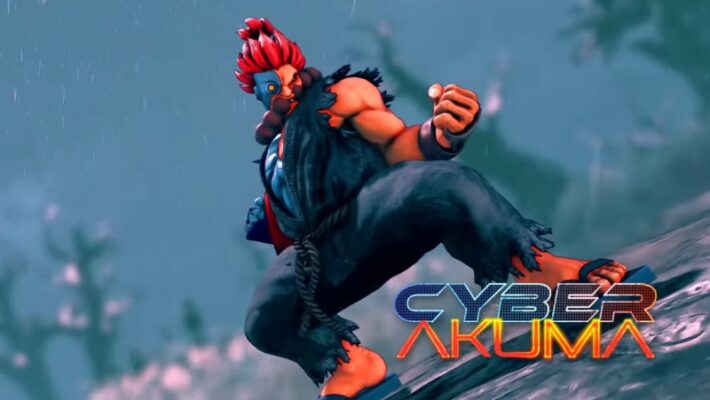 Capcom is gracing the Street Fighter V roster with a powerful fusion of monster and machine: Cyber-Akuma. The martial arts master will receive a mechanized upgrade in the form of a new costume on September 21, 2021. Capcom also teased via Tweet that a new costume will also be announced at the Street Fighter League Season 3 US Finals, scheduled for September 16, 2021.

Check out a short trailer for the Cyber-Akuma costume below.

The Cyber-Akuma Street Fighter V costume has no particular effect on his move set. It replaces Akuma ‘s arm and part of his face with metal and robotic parts. When he does certain animations, a pair of metal wings will also sprout from his back, recalling features of classical super robot designs like that of Mazinger Z. Cyber-Akuma’s fighting gi also bears a different character on its back. Whereas regular Akuma has the iconic “天” (Ten, meaning “Sky” or “Heaven”), Cyber-Akuma has “滅” (Metsu, or “Destruction”) on his back.

This new costume design is a reference to the character of Cyber-Akuma. Known in Japanese as “Mecha-Gouki” (using Akuma’s Japanese name), Cyber-Akuma originated in 1997’s Marvel Super Heroes vs. Street Fighter as the final boss. Akuma was captured by the Marvel villain Apocalypse and cybernetically enhanced. Besides Street Fighter V, the Cyber-Akuma design also appeared as a costume in 2011’s Ultimate Marvel vs. Capcom 3, and made a cameo appearance in Udon Comics’ Street Fighter Unlimited comic book series.

Street Fighter V is immediately available on PS4 and PC. The Cyber-Akuma costume will release on September 21, 2021 for $3.99. The costume also comes as a part of the Season V Premium Pass. New characters Oro and Akira were released on August 16, 2021.