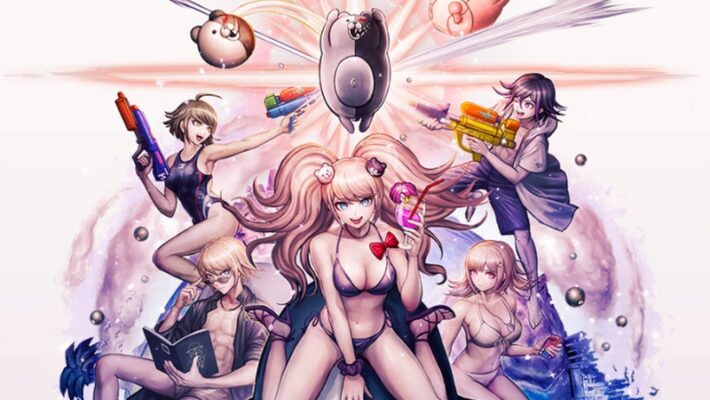 Spike Chunsoft released new details about the Danganronpa S: Ultimate Summer Camp story. The game, which is included in the Danganronpa Decadence package, is essentially an expanded, standalone version of Danganronpa V3‘s mini game mode. It was first revealed alongside Decadence, which packages all three mainline Danganronpa titles alongside Danganronpa S in a single bundle for the Nintendo Switch [Thanks, Famitsu!].

According to the reveal, the Danganronpa S: Ultimate Summer Camp story follows various students at Hope’s Peak Academy making it through their three-year high school life without incident. To cap it off, the kids attend a six-week talent training camp at the tropical resort of Jabberwock Island. Or rather, a virtual reality simulation of the island, located inside an advanced facility hidden underneath the school building.

Supporting the students in their “Ultimate Summer Camp” are the Monokuma Kubs. First seen in Danganronpa V3, the Kubs are a group of five robotic antagonists who are the “children” of series mascot Monokuma. The Kubs lost the fabled Monokuma Wand. It’s an in-simulation management tool used to keep Jabberwock Island safe. As a result, the island has become dangerous. Its Monokuma helper robots are roaming the surface, seeking victims. The Hope’s Peak students must then take the fight to the Monokumas in order to survive the simulation and get back to the real world in time for graduation.

Danganronpa S will feature a gacha-style vending machine that distributes special cards, items, and gifts that players can use to improve their abilities. They’ll also see special cards with new illustrations and scenes. As reported previously, the system will be accessible using in-game currency, but optional microtransactions will be supported.

Danganronpa Decadence will release for the Nintendo Switch on December 3, 2021. All four games, including Danganronpa S: Ultimate Summer Camp, will also be sold separately.