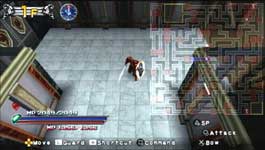 What separates Dungeon Maker: Hunting Ground from other dungeon crawling games? You’re the architect of the maze and it’s up to you to lure monsters into your labyrinth. By shoving L, T and straight line pieces together you can build a cozy home for goblins. Making a dungeon is pretty user friendly, you just walk up to a blank wall and hit triangle to place a piece or build a room. The game automatically shows you what choices you can use and it will not let you build a broken maze. However, building a dungeon costs money. You will need to pawn the fur shirt the kobold dropped and the new spear you found to get cash for more rooms. As you build a twisted maze stronger monsters show up, you get better item drops and more money to build your dungeon. It’s a vicious and addictive circle. 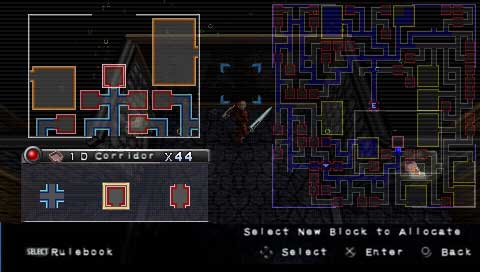 While you do spend some of your time building a dungeon in Dungeon Maker: Hunting Ground, you are mostly grinding through the same maze over and over again. This is one of the unfortunate cons about Dungeon Maker: Hunting Ground. Unlike other dungeon RPGs you are mostly running through the same maze, your maze. You know where the treasure rooms are and where the strongest monsters are going to be hiding. To balance this out you will occasionally discover randomly placed portals in your dungeon to a mysterious dungeon made by the game. While it’s nice to venture around random dungeons with more treasure rooms, if you built your dungeon right it will have more powerful enemies than the created dungeons. If you know someone else that has Dungeon Maker: Hunting Ground you can exchange dungeons and explore the ruins to try out their maze. By now you might be wondering why you are wandering and building this massive multi-floor dungeon. The goal of the game is to lure in the wandering demon, but before you do that you’re going to do fetch quests for the villagers who want worthless items like bone helms. It’s a weak pretense to get in the dungeon and slay some goblins, which is what Dungeon Maker: Hunting Ground is really about. 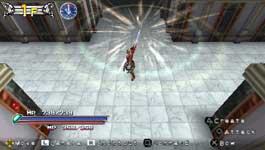 The architect isn’t a bad warrior either, he can use a handful of weapons (swords, clubs and spears) and each one slightly changes how he fights. If you equip a sword you do a fast swipe and a wide horizontal swing when you press the circle button. You also have a spinning slash when you press circle followed by triangle, the button for slower and more powerful attacks. If you give the architect a club his attacks are much slower, but they have a chance to temporarily stun an enemy. Later the architect can pick up a bow as a secondary weapon, which enables him to do a three hit ranged combs. The architect also can cast magic spells like rock and thunder to hit a group of enemies while water concentrates its power to hit a single foe for more damage. When you are raking in the cash you can purchase summon magic books, like Salamander and Undine. When you call Salamander the ground around the architect ignites and salamanders run out with a trail of flame behind them. This spell hits all of the nearby enemies for a couple hundred points of damage, easily four or five times your physical attack. 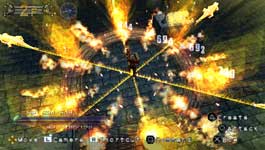 The downside about combat is that it doesn’t change much throughout the game. Besides the occasional weapon switch prepare to do the same attacks for 25+ hours of gameplay. Alternatively, you can make the architect a mage by forcing him to eat meals that boost his MP and intelligence and rely on shooting fireballs from far away. You build up the architect by eating meals before you rest from a long day of dungeon crawling, not from fighting monsters. To eat you need to use the meat you earned from fighting bats and wildcats plus a few ingredients from the market. You can only eat once per day, but you can quickly build up your character by entering/exiting the dungeon. It’s inconvenient, but since you only get a few HP per meal this is the fastest way to boost the architect during the first few hours of the game. 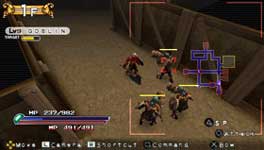