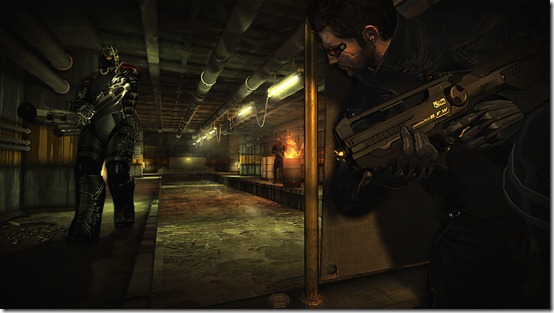 In a behind closed doors presentation, Mary DeMarle, Writer, presented a small portion of Deus Ex: Human Revolution. The room was dimly lit with books scattered on the floor. I could have sworn there was a baseball bat there too. I took a seat behind a couch plus fortune cookies, which were on a coffee table. Square Enix was serious about decorating this room considering their Kingdom Hearts area just had wallpaper or Sora and the Birth by Sleep cast. DeMarle started the demo by emphasizing four gameplay styles: stealth, social, combat, and hacking. It’s up to the player to decide, which one to use.

The first one I saw was “social.” Six hours into the game, Adam was searching for a hacker in Shanghai, which was bustling with digital people. You could hear chatter fade in and fade out as Adam walked by. Adam can talk to non player characters to get sidequests and startle them by pulling out his gun. This was demonstrated to show how people react to Adam.

But, there wasn’t time to stick up pedestrians for fun. There was a hacker to find and Tong, who hung out in a gritty nightclub called The Hive, may know his whereabouts. A bouncer blocked the entrance and demanded Adam slip him some cash to get in. DeMarle explained Adam’s choices: scoping out a sewer path (stealth), shooting the bouncer (combat) or simply paying him off. In my demo, Adam handed the bouncer money and entered the club.

“Keep walking,” someone shouted as Adam walked in and up a staircase. A bartender with a crudely made cybernetic arm was upstairs, but wouldn’t say where Tong was. Three dialogue styles popped up: insist, pinpoint, and advise. Whatever one the developer picked didn’t convince the bartender. The social path was closed, but DeMarle assured it was possible to convince the bartender to give up Tong’s whereabouts. Walking around the club hinted at another route. Two people mentioned a lost iPad-like PDA, which Adam found in the bathroom. The device revealed a basement path with a few guards to takedown. When Adam goes into cover or finishes an opponent off the game zooms out to a third person camera then switches back to Adam’s eyes. The effect of returning back to Adam’s line of vision is neat.

The basement led to a vent Adam could peer through where he saw Tong (who was really the bartender) talking about the hacker. Tong was paid off not to talk and the scene faded out to an all out action part. 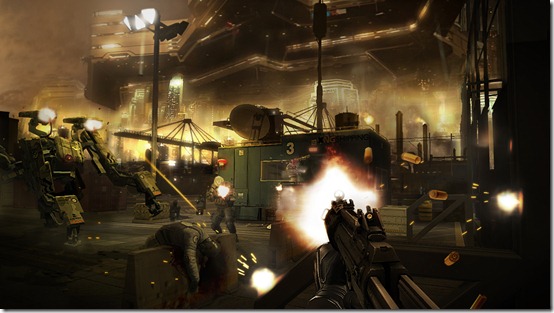 In a seaport level I saw Adam, equipped with a strength augment, lift crates to create new paths. You see Adam pick up the crates through his eyes and the game gives them a translucent effect while Adam is holding them. These new routes allowed Adam to sneak through the port, but DeMarle explained he could have gone in the level with guns blazing. Since we watched a stealth run, the developer finished off enemies with takedowns. In these moves Adam ejected a knife from his elbow to lethally cut enemies.

Adam discovered a computer station on this route, which was his to use after killing the guard manning it. The security console let Adam view cameras and scout out another path. Adam used two other augments – one that let him see through objects and another that makes him invisible. While these augments are geared for stealth, there are augments for the social route and hacking too.

A giant robot was the biggest obstacle Adam had to face. His gun wasn’t doing much damage, but there was a rocket launcher nearby to grab. Adam grabbed it and DeMarle explained weapons like this can be upgraded on the fly — even in the heat of battle. After upgrading the weapon, Adam blew up the robot and finds the bomb… is about to blow! Adam grabs a chair and uses it to smash a window. It doesn’t break, but it damages it enough so Adam can escape right before the bomb explodes.

Another mechanically augmented man is waiting for Adam. He looks like he stepped out of Wolfenstein 3D with hands that transform into machine guns. He grabbed Adam and the demo ended with the E3 trailer we showed you earlier this month.