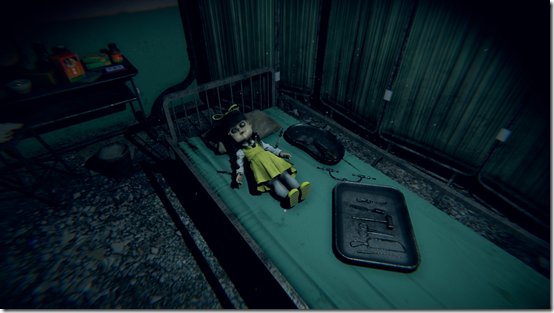 Red Candle Games has finally offered an update on the state of Devotion, a horror game that was pulled digital distributors following the discovery it included a reference to China president Xi Jinping. At the time, an apology was made for what the developer called an “art material incident,” and the game was pulled from storefronts in February 2019. Now, an official update has been released on Twitter that includes an additional apology, a note saying that the developer co-founders have decided “to not re-release ‘Devotion’ in the near term,” and that it may reconsider re-releasing the game in the right circumstances.

Here is Red Candle Games’ full statement regarding Devotion. One of the most important points is the third one, in which the developer noted, “As we reflect on the situation, we notice many players, industry friends, and the media are starting to understand that the incident was indeed a malfunction of project management, not a deliberate act. If, in the future, the public would be willing to view this game rationally and allow us the opportunity to rebuild trust with our players, Red Candle would reconsider re-releasing ‘Devotion.’” 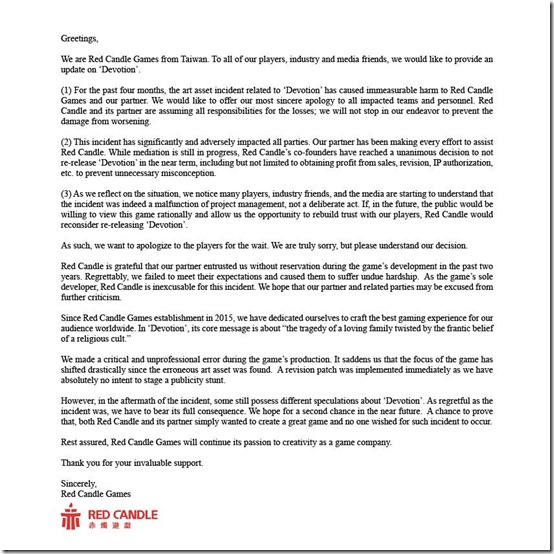 Devotion followed the unfortunate circumstances of the Du family. Feng Yu’s isn’t making money writing movies. His daughter, Mei Shin, wants to become a singer, but is growing increasingly ill. Players follow along as things worsen for the family and Feng Yu turns to a cult for the god Cigu Guanyin for relief. People would explore the world looking through Feng Yu’s eyes, resulting in an experience that plays similarly to P.T.

Devotion originally appeared on PCs. It is no longer available to purchase.