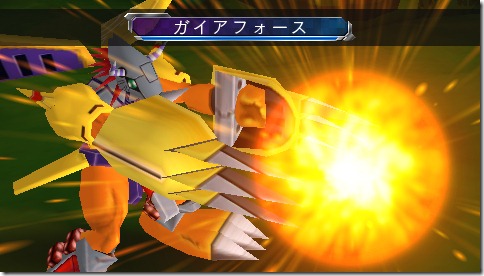 As we’ve reported before, Digimon World Re:Digitize uses Digimon World 1, an old Playstation 1 game released in 1998, as a base. This was the original premise — to call back to the first Digimon World game, instead of the sequels that were vastly different.

Digimon World Re:Digitize is the answer to fans’ calls for something similar to Digimon World 1, but it seems like the PSP has inherited almost everything everything from the original World.

In the game, “Digimon” is a popular online game where you raise monsters and battle them. The main character is a fan of the game. One day, he logs into the game as usual when he gets an unusual email with some code in it. After decrypting it, he’s sucked into the Digital World, where Digimon are real. He, with his partner, explores the Digital World, trying to find out why he was sucked in in the first place.

Digimon are Digital Monsters and, in Re:Digitize, they have 5 evolution levels — Baby, Rookie, Champion, Ultimate, and Mega. If you played the original Digimon World, you may recall that was released before the 5 levels had taken root, so it ended at the fourth evolution.

Digimon evolve with the passage of time and which form they evolve into is based off their stats and other factors. While he’s prominently featured, Agumon isn’t the only partner you can have, as there are screenshots of the player running around with a Gabumon as well. 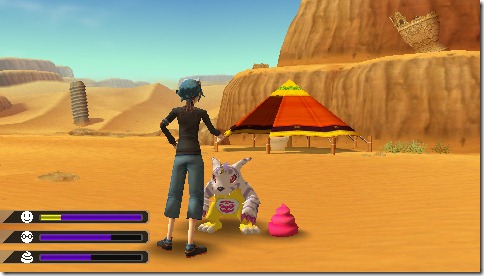 Back are the Shops run by Digimon and the Meat Farm. Your Digimon can and will get hungry, sick, and injured, and you’ll have to give the proper care to get them back into top shape. The Digimon’s digestive system is also back on track, and throughout the game, you’ll have to care for their toilet needs as well. 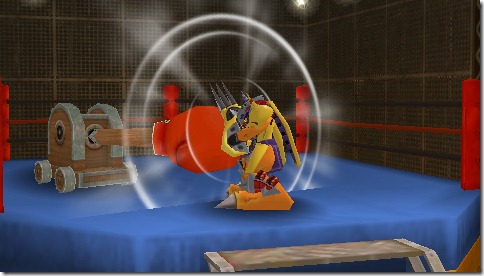 Training is back, and each Digimon type has some stats that are better and some that are worse. If you wander into the field, you’ll see Digimon running around, and if you run up to one, you’ll engage in a battle. Battles are handled by very general commands that are more like “advice” for your Digimon rather than actual commands.

For example, sometimes your Digimon won’t listen to you, especially if your Digimon has low Discipline. Also, you get more commands with increased Intelligence, which is one of the stats you can train. The battle is in real-time, and you also have items you can use (also in real-time) to heal your Digimon and to cure status effects.

Finally, Finishing Blows are back and with more detail on the PSP, so you can see your favorite Digimon’s attacks again.