Every Extend started out as a freeware project by a programmer called “Omega” in Japan, but after Q? Entertainment got their hands on the game they wanted to bring the game out to the masses. Like their previous PSP game, Lumines, Q? Entertainment infused music as key component to the game. Every Extend Extra even got the tag line “music in your mind” and a style that looks like a more colorful version of Rez. So what are the changes from the PC game to the PSP? 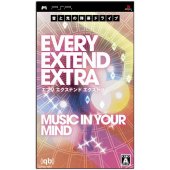 Besides the new look and the stages the core concept of Every Extend remains the same in Every Extend Extra. You play as a floating wire frame ship with one major ability, self destructing in the hope to blow up near by cubes and bosses. There is a trick to the whole system, when the ship explodes it causes a chain reaction that extends the blast radius for each enemy shot down. Naturally enemies come in patterns for players to detonate. Each time a ship blows up there is one less in the stock to use. The only way to continue playing is to “extend” gameplay by racking up points to get extra ships. It is a creative system that makes Every Extend Extra more like a puzzle game based on correct explosion timing than a traditional shoot-em up.

There is a key addition to Every Extend Extra over Every Extend, the ability to create a bomb. If a player holds down the L trigger and one of the blast buttons, a tiny bomb is released which charges up over time. Releasing the bomb allows players to create larger chains and detonate two areas simultaneously. The downside is the ship moves slower while the bomb is placed, which makes it harder to dodge flying cubes and the occasional shooting green orb. If the ship gets hit from a flashing bullet you lose one from your stock plus five seconds on the game’s timer. Time is important since there is a preset time where players can explore a level and freely detonate enemies for points. After the clock reaches about fifty seconds players will automatically enter the end of stage boss battle. There are a couple of ways to extend play time. First is picking up yellow crystals that extend the time limit. These are typically found by blowing up ships that fire back. Or you can opt to hit the pink colored ships, which release quicken power ups. Quicken items increase the speed everything moves so more ships appear on screen to detonate. Since Every Extend Extra is a game based around scoring lots of points players will want to take advantage of snagging quicken crystals, time extend crystals and green crystals that increase a player’s score.

Boss battles in Every Extend Extra play out slightly differently than the typical game. The only way to take down the flying disco ball in the first stage Saturday Night Drive or the monstrous plants at the end of Sakura Drive is to have hit a boss with a set number of chains. When you’re beginning to fight the flying disco ball in the first level you need to make sure the chain combo is greater than five before hitting it. Boss battles are more similar to standard shoot-em up gameplay. There is plenty of dodging to be done, but at times all of the flashing colors on screen make this more difficult that it should be.

Like Mizuguchi-san’s other titles there is a heavy techno music influence in Every Extend Extra. The soundtrack doesn’t play as integral part of the game like Rez or Lumines, but it’s still part of the music in your mind experience. Q? Entertainment sticks to a nightclub style look with E3. It’s colorful and at times very trippy like in one level where the player floats through a background of moving spotlights. If there is one major downside to Every Extend Extra is that there are only nine different levels besides the original game in the package. With that out of the bag, Every Extend Extra is a solid game and worth at least trying out if you own a PSP.

One of the more import friendly games out there since Every Extend Extra has English menus, except for the tutorial.

Buena Vista Games will be publishing this in North America around October 2006.

+ Pros: Unique, challenging and addictive makes Every Extend Extra one of the better puzzle games to date.

– Cons: Part of the enjoyment of Every Extend Extra comes from liking or disliking electronic music. Also if you’ve played the original PC game there isn’t too much “extra” added to the gameplay.

Overall: If you have a PSP and liked Lumines, Every Extend Extra is a perfect follow up. It has some of the cerebral qualities of Q? Entertainment’s other titles with a little more action in the game.